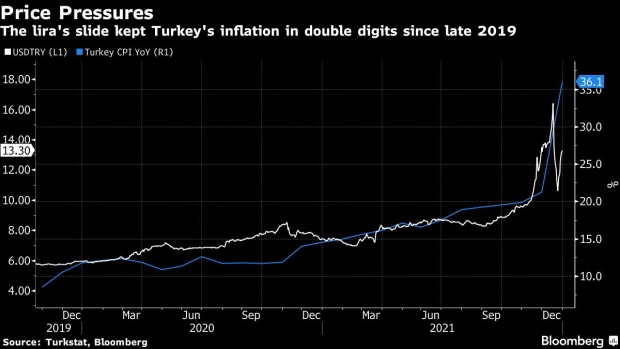 China’s economy, still hurting from a property market slump, is now bracing for a hit from partial shutdowns as authorities try once again to halt the spread of Covid-19.

Gross domestic product data due Monday will likely show the impact of the real-estate downturn in the fourth quarter, as well as electricity shortages. Growth may have slowed to its weakest in more than a year, according to economists in a Bloomberg survey, even before the emergence of omicron-variant cases this month.

Beijing’s hardline approach to stamping out coronavirus cases through lockdowns and quarantines is curbing consumer spending and disrupting some production and shipping operations. Goldman Sachs economists have already cut this year’s growth forecast for China to 4.3% due to the increased difficulty of containing the highly-contagious new variant.

The gloomy outlook is fueling speculation of monetary stimulus, with officials already paving the way with more dovish signals. Some analysts are betting that an interest-rate cut could come as soon as Monday as the central bank looks to front-load its support.

“The data will likely depict an economy that is in need of more policy support to counter pressures from virus outbreaks, supply-chain squeezes and power shortages.”

Any easing would put China at odds with major economies like the U.S., which is preparing to hike interest rates. In China, recent data showed a notable slowdown in factory-gate and consumer inflation, adding to calls for rate cuts.

The country’s strict adherence to its Covid Zero approach has risks for the rest of the world. If Beijing widens lockdowns to contain virus outbreaks, it will likely worsen global supply chain pressures that have boosted inflation in the U.S. and elsewhere.

Even so, China managed to ship a record level of goods in 2021, including to the U.S., despite sporadic lockdowns of ports and lengthy shipping backlogs.

Elsewhere in the coming week, U.K. inflation probably accelerated to match the fastest pace this century, the Bank of Japan will consider signs of price pressures, and the European Central Bank will release minutes of its December deliberations.

Away from China, the BOJ will be another highlight in the region. Haruhiko Kuroda kicks off his final full year as governor with an unveiling of price and growth projections on Tuesday.

Even upwardly revised forecasts are likely to look subdued by global standards, but will point to growing cost pressures the BOJ must consider as it sticks with stimulus for now. Inflation figures for December will follow later in the week, along with trade numbers.

In Australia, monthly consumer confidence released Wednesday is likely to be hit by the raging coronavirus, while December labor market data out Thursday is unlikely to capture the full impact of the worsening outbreak.

The jobs report will be one of the last pieces of key data the Reserve Bank of Australia sees before it meets Feb. 1 to decide on the fate of its bond-buying program. Elsewhere, South Korea’s early export report for January will give a sneak preview of global trade at the start of 2022.

Meanwhile, central banks in Indonesia and Malaysia on Thursday are expected by economists to keep interest rates unchanged in their first meetings of the year, while officials in Sri Lanka are predicted to deliver a hike.

The U.S. data calendar is rather light during a holiday-shortened week, with reports on December housing starts and sales of previously owned homes on the schedule.

Both new construction and home purchases are projected to soften. Weekly jobless claims and a pair of regional manufacturing reports are also on tap.

The Federal Reserve is in blackout as central bankers get ready for their Jan. 25-26 policy meeting, with the FOMC voting lineup having been reshuffled at the start of the year.

Labor statistics on Tuesday may show a continued tight employment market. On Wednesday, a further uptick in inflation to 5.2%, the median outcome anticipated by economists, would match the previous high for the current century. Any higher would mean the fastest pace of price increases since the early 1990s.

A second reading of inflation in the euro zone on Thursday will confirm if the rate did indeed unexpectedly accelerate to a record 5% in December. Meanwhile, minutes of the ECB’s December decision will give insights into policy makers’ views at the current juncture.

The economic outlook may be on the minds of euro-zone finance ministers on Monday at their first meeting of the year, which will feature a debut by Germany’s newly appointed Christian Lindner.

Elsewhere, Norway’s central bank is likely to keep its key rate unchanged on Thursday in a pause before further potential tightening. The meeting is the last in the 11-year stint of Governor Oystein Olsen, whose successor may be announced in the coming week after a selection process mired in political controversy.

The same day in Ukraine, monetary officials take a decision that some economists say could result in another rate hike, while Hungary’s central bank is likely to stay unchanged after its own meeting.

Looking south, Nigerian data on Monday will probably show inflation fell below 15% last month for the first time since November 2020, giving the central bank leeway to keep borrowing costs at a six-year low the following week.

On Wednesday, South African statistics will probably show inflation for December was close to the top of the central bank’s 3%-to-6% target range. That would underscore the dilemma policy makers will face when they meet at the end of January: how to balance efforts to tame price growth with supporting an economy grappling with fallout from the pandemic, electricity outages, and a slow reform process.

Based on its own guidance, Turkey’s central bank will hold interest rates steady on Thursday, after cutting four times in as many months. But it’s never wise to rule out surprises there; President Recep Tayyip Erdogan pushed for cheaper borrowing in 2021 even as the currency tumbled and the inflation outlook worsened.

Colombia on Monday posts November data for trade and economic activity, which is expected to be solid but off October’s pace.

Amid an uneven recovery from its 6.8% plunge in 2020, the nation’s economy is widely seen as having expanded by more than 9% in 2021, its fastest pace in decades. While challenges abound, many analysts still forecast that Colombia will lead the region’s big economies in output this year.

Argentina reports December trade data and may post budget figures for the same month, while Chile’s central bank publishes its survey of traders’ expectations. From Mexico, expect figures for international reserves, same-store sales, the Citibanamex survey of analysts, and unemployment results for December, which may come in near a pre-pandemic level.

Data out of Brazil include some early readings of monthly inflation and weekly trade, while the central bank posts its Focus survey of analysts as well as its monthly GDP-proxy for November. Falling confidence, double-digit inflation and rising interest rates have analysts forecasting a fifth straight negative print.

Latin America’s biggest economy is in a recession -- it posted second- and third-quarter contractions in 2021 -- and may only manage a scant expansion in 2022 given a variety of headwinds.