The Chinese economy returned to growth in the second quarter, marking an important milestone in the global struggle to climb out of the slump brought about by the coronavirus.

Gross domestic product expanded 3.2 per cent in the three months to June from a year ago, reversing a 6.8 per cent decline in the first quarter and beating the median forecast of 2.4 per cent. However, the world’s second biggest economy remains 1.6 per cent smaller than a year ago. 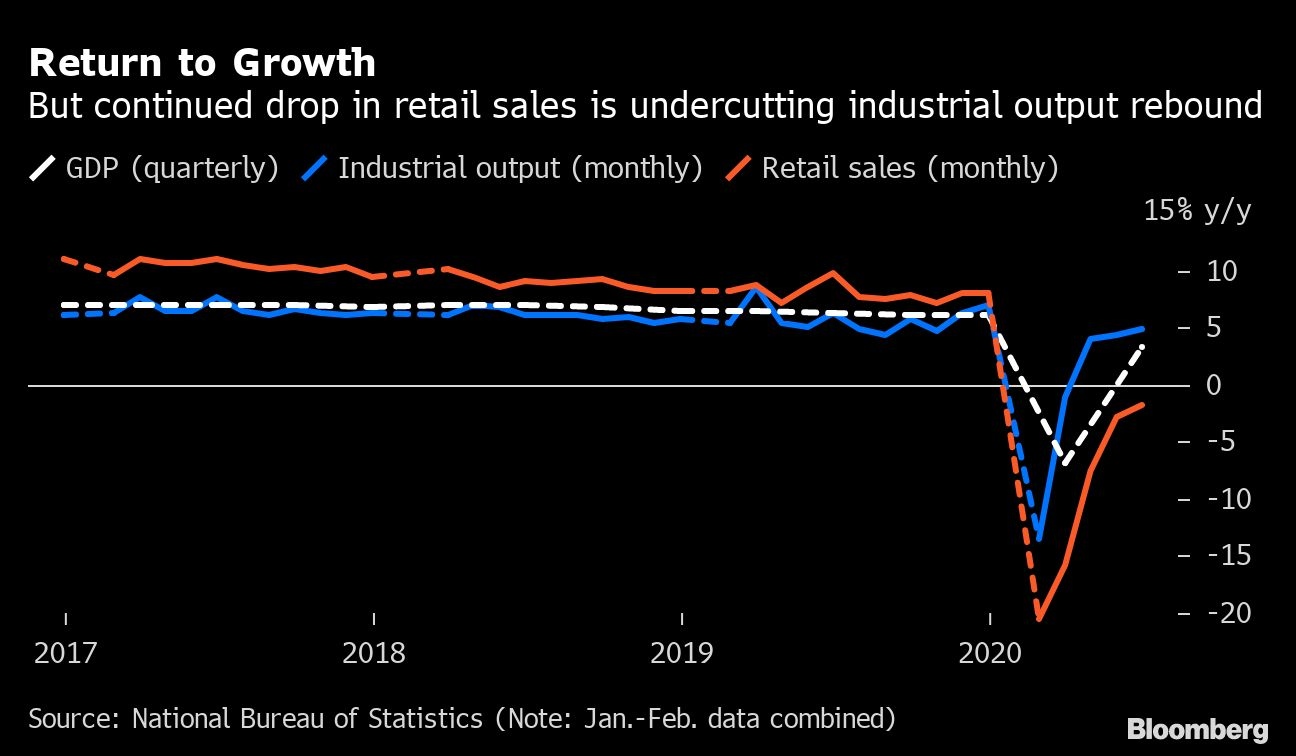 Having shut its economy in the first quarter to arrest the virus spread and managed so far to largely defeat subsequent outbreaks, a conservative stimulus approach by policy makers has produced only a modest domestic recovery.

The rebound has been largely industry-driven, while consumer spending was weaker than expected. It also remains vulnerable to setbacks in foreign demand as lockdowns continue to hamper activity abroad.

The CSI 300 Index fell one per cent at 10:54 a.m. local time, heading for the first three-day loss since May, further evidence that the recent exhuberance in Chinese stocks is fading.

The recovery “was driven by credit stimulus as evident in the strong infrastructure and property investment, while the recovery in retail sales and private investment has continued to lag,” said Michelle Lam, greater China economist at Societe Generale SA in Hong Kong. “Policymakers will probably save bullets and hold back broad-based easing and find the current growth trajectory acceptable.”

A raft of measures have been rolled out since the pandemic to shore up the economy, including tax and fee cuts, cheaper loans, and increased fiscal spending. Stimulus has still fallen far short of the policies offered in developed economies, out of concern for debt buildup and financial stability.

The poor retail picture may be less negative than the headline data indicate. Sales of cosmetics, beverages, telecommunication equipment, daily use articles and alcohol and tobacco all posted double-digit increases. Autos and petroleum-products posted large declines though were likely influenced by one-off factors. 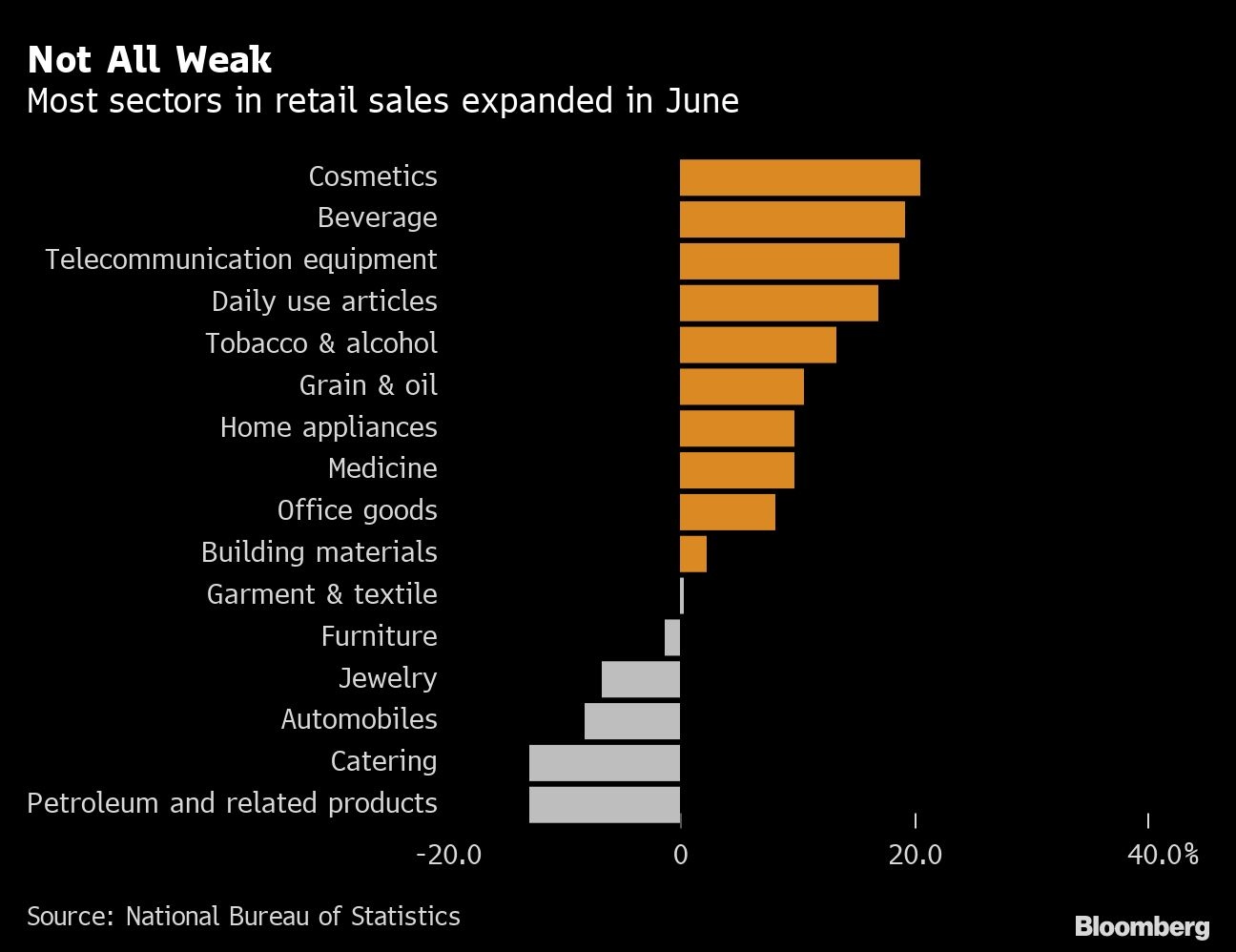 Private companies were still cutting back on investment in the first half of the year, while spending by state-owned firms saw a big jump in June, rising 2.1 per cent per cent in the first six months after falling 1.9 per cent through May. Manufacturing investment was down almost 12 per cent.

“China’s economy has gradually overcome the negative impact brought by the virus in the first half, showing recovery momentum,” Liu Aihua, NBS spokesperson, said in Beijing after the data was released. “The recovery of the domestic economy still faces pressure amid rising external challenges.”

Debt levels in the real economy continued to rise in the second quarter albeit at a slower pace than in the first three months. The ratio stood at 265.4 per cent at the end of June, versus 258 per cent in March, according to Bloomberg calculations.

China’s economy bounced back strongly in 2Q - but now the challenge will be to sustain the recovery. “Continued momentum in June production bodes well for growth in 2H. But weak consumer spending remains a serious, persistent drag.”

A major headwind to the recovery is the level of unemployment created by the collapse in manufacturing in the first quarter. The surveyed unemployment rate doesn’t capture the full impact, and tens of millions may still be out of work due to the pandemic.

Fighting unemployment and creating jobs are one of the main focuses of the government since the pandemic broke out. Premier Li Keqiang said earlier this week China needed to prepare for “tough challenges ahead, especially posed by the high employment pressure and other difficulties confronting the economy.”

Another headwind for the government is the increasing efforts of the U.S. to isolate China, banning its own firms from doing business with some Chinese companies and entities, and also pushing other nations to do the same. In a recent letter that was reported Thursday, President Xi Jinping appealed to global CEOs to continue doing business in China, promising to deepen reform and opening up.

Economists stressed the uneven nature of the recovery and the risks ahead.

“The message is clear here that China’s recovery is much stronger than the rest of world, largely benefiting from the effective epidemic control and the orderly normalization procedure,” said Zhu Haibin, Chief China Economist at JPMorgan Chase and Co. “In the second half, the momentum of further recovery will be softer.”

--With assistance from Charlie Zhu and Miao Han.