China’s slowdown is deepening just as risks for the global economy mount, piling pressure on the authorities to do more to support growth.

Industrial output rose 4.4 per cent from a year earlier in August, the lowest for a single month since 2002, while retail sales came in below expectations. Fixed-asset investment slowed to 5.5 per cent in the first eight months, with the private sector lagging state investment for the 6th month.

The data add support to the argument that policy makers’ efforts to brake the slowing economy aren’t sufficient as the nation grapples with structural downward pressure at home, the risk of yet-higher tariffs on exports to the U.S. and now surging oil prices. Nomura International Ltd. said this all raises the likelihood that the People’s Bank of China will cut its medium-term lending rate on Tuesday.

“In terms of policy room, we still think there’s quite a lot for both the Ministry of Finance and the PBOC, but now it’s a matter of whether they want to use it,” Helen Qiao, chief Greater China economist at Bank of America Merrill Lynch said on Bloomberg television. “What I worry about is that policy makers are hesitating at the moment because of the potential implications on the long term impact, so they’re really fallen behind the curve.” 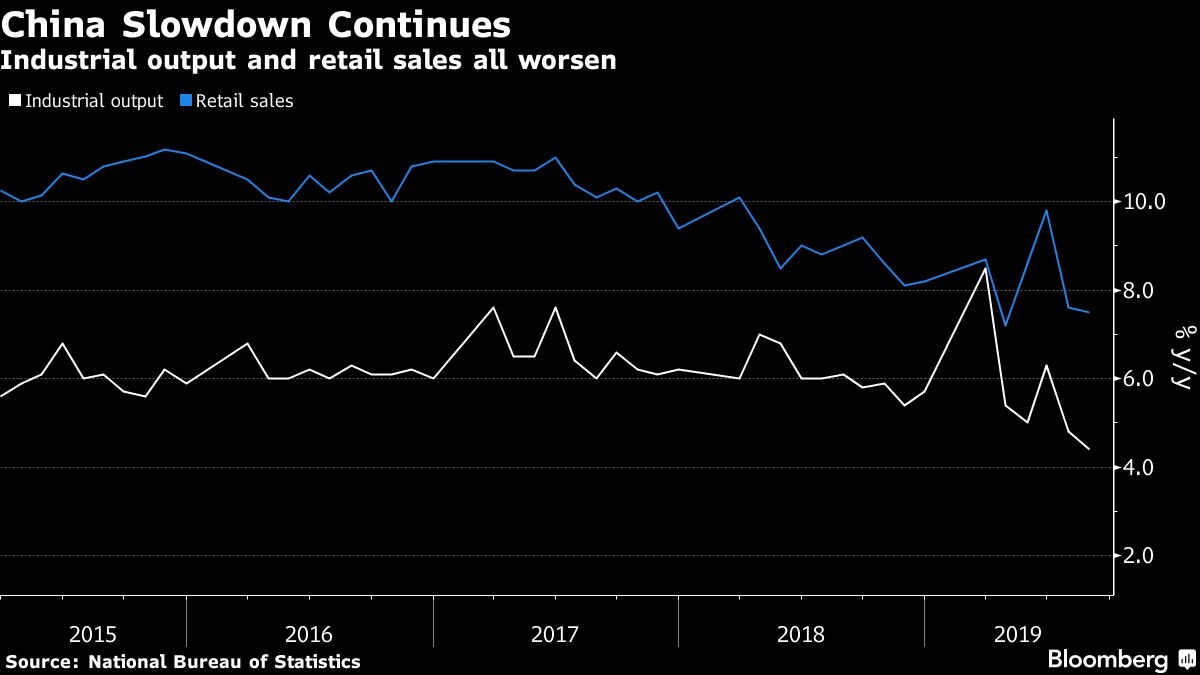 The Shanghai Composite swung between gains and losses before closing slightly lower. Futures contracts on China’s 10-year government bond regained losses after the data release to close at 0.07 per cent higher on Monday.

The slowdown in output was almost across the board, with food processing and general equipment manufacturing unchanged from last year. Car output rose after declining for four months. Growth in sales of consumer goods slowed to 7.2 per cent, the lowest since April this year, but there was an increase in food sales. The unemployment rate fell to 5.2 per cent from 5.3 per cent in July, within the narrow band it has occupied all year even amid the slowdown.

The record oil price surge after a strike on a Saudi Arabian oil facility couldn’t have come at a worse time for China and a world economy already in the grip of a deepening downturn. While the severity of the impact will depend on how long the oil price spike endures, it risks further eroding fragile business and consumer confidence amid the ongoing U.S.-China dispute and already slowing global demand.

Saudi Arabia is the largest single source of China’s crude oil imports, which in turn supply about 70 per cent of total demand. 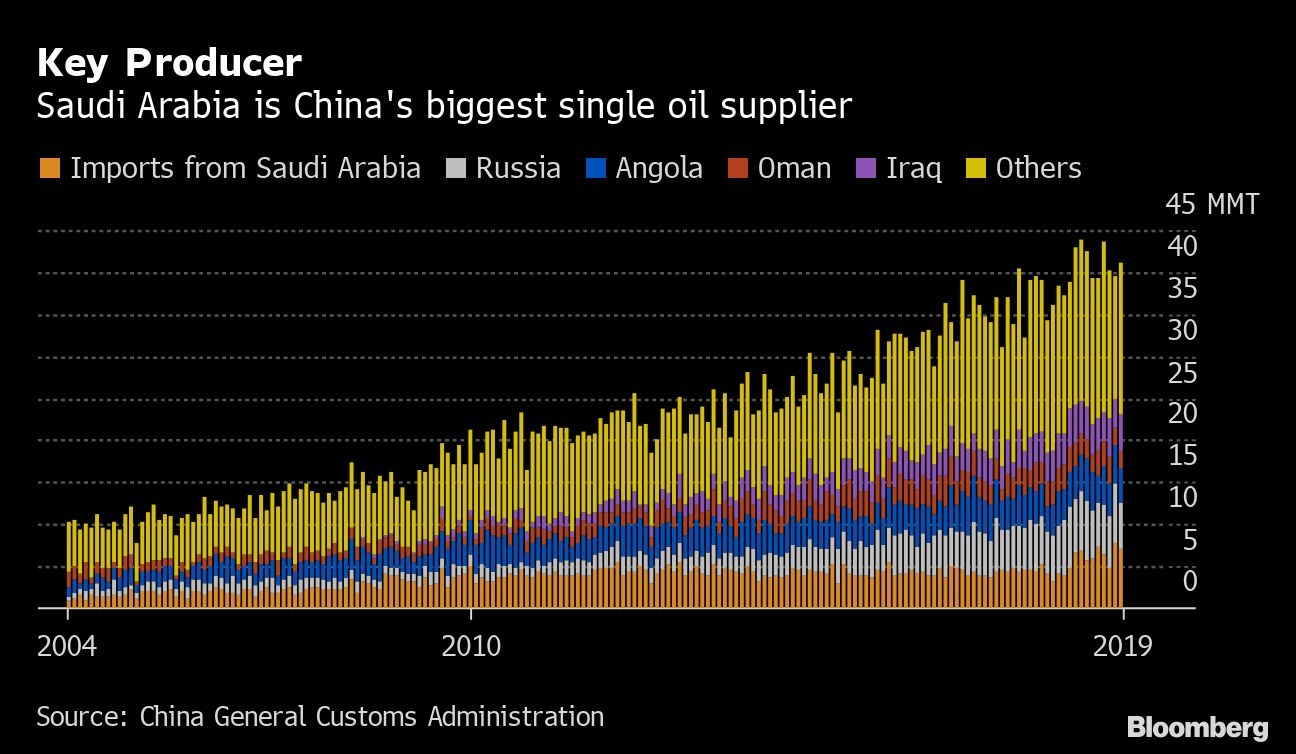 After China’s data release on Monday by the National Bureau of Statistics, Citigroup Inc. lowered its growth forecast for the world’s second-biggest economy to 6.2% for this year from 6.3% previously, and to 5.8 per cent from six per cent for 2020.

“We don’t expect a growth rebound in the fourth quarter anymore, with the new forecast flat at 6.1 per cent year on year,” wrote Yu Xiangrong, a Hong Kong-based economist with Citigroup, referring to the quarterly outlook. “In particular, we now hold a more cautious view on the recovery of infrastructure investment and retail sales.”

The People’s Bank of China cut the amount of cash banks must hold as reserves this month to the lowest level since 2007, though it’s still holding off on cutting borrowing costs more broadly.

Some 265 billion yuan (US$37.5 billion) of 1-year loans from the PBOC to banks will mature on Tuesday. The central bank will likely roll-over at least some of these, giving it an opportunity to cut the rate it charges.

Analysts are divided on whether the PBOC would actually take the chance to cut. Some see the need for more significant easing while the other argue the authorities would like to avoid announcing multiple stimulus at once, and they’ll watch the U.S. Federal Reserve before taking any actions themselves. The Fed is expected to cut rates this week.

Morgan Stanley expects borrowing costs to be cut by 10-15 basis points as early as this week, likely in the form of an medium-term lending rate cut.

“We expect policy support to continue at a measured pace as Chinese authorities strive to put a floor under the slowing economy. Yet, officials are bracing for a long war, and are careful not to deplete their policy ammunition.”
-- Chang Shu and David Qu, Bloomberg Economics

It’s getting more difficult to “safeguard six per cent” expansion in the third quarter and growth will likely slow further from the pace in the second quarter, China International Capital Corp. economists led by Eva Yi wrote in a note. Not only is it necessary, but there is room to step up the intensity of counter-cyclical adjustment in a timely manner to make sure economic growth won’t slip below the targeted growth range of 6-6.5 per cent, Yi said.

There are likely to be more easing measures including cuts to banks’ reserve ratios and the PBOC’s mid-term lending rate, although that cut probably wouldn’t happen this week, said Peiqian Liu, China economist at Natwest Markets Plc in Singapore. The pace of economic slowdown is faster than expected and the impact of the trade war on Chinese manufacturers has been relatively big, she said.

Negotiators from China and the U.S. plan to have two rounds of face-to-face negotiations in coming weeks. Both sides have taken steps to show goodwill, and U.S. officials are considering an interim deal to delay tariffs with China, people familiar with the matter told Bloomberg.

However, even if those talks do go well and get the negotiations back on track, it may not be enough.

“Even a reprieve on the trade front, with U.S. and Chinese negotiators back at the table, will not in itself cure China’s growth malaise,” said Frederic Neumann, co-head of Asian economics research at HSBC Holdings Plc in Hong Kong. “There is a growing risk that keeping the reins too tight may push growth much lower.”