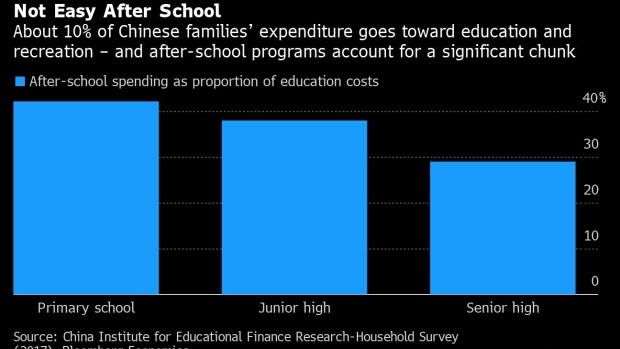 China’s regulatory overhaul of the private education sector will have a limited impact on economic growth this year, but could be beneficial over the longer term by reducing the cost of raising children and encouraging births, according to a Bloomberg Economics report.

The stringent new rules, which ban companies from offering tutoring related to the school syllabus on weekends or during vacations among other things, are intended to bring down high education costs that are preventing families from having more children, economists Chang Shu and Eric Zhu said in a report. It comes against the backdrop of a declining birthrate, aging population and shrinking workforce.

The reforms, which have sent education stocks plummeting from Hong Kong to New York, are unlikely to derail China’s economic recovery for the rest of the year since the sector only accounts for a fraction of the economy, the economists said. One estimate suggests a market size of about $100 billion in 2019, equivalent to 0.7% of China’s gross domestic product at the time, they said.

Consumption could get a boost in the long term from higher population growth and re-directed education spending, according to the report.

The authorities are likely to make a transition arrangement to make sure tutoring firms won’t go bust en masse, which could risk disrupting the economy and social stability, the economists said. Many households have made large pre-payments for the programs, and the sector employs a large number of university graduates.

But the reform also poses downside risks to long-term growth, the economists said, such as job losses as well as reduced private investment sentiment due to a rising narrative that the government aims to strengthen the public sector at the expense of private firms.