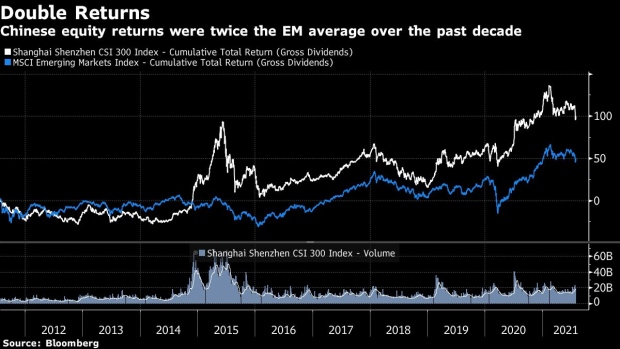 (Bloomberg) -- A recovery in Chinese stocks following a meltdown at the start of last week underscored how investors in emerging markets have few alternatives that are as big and liquid.

After ditching the Asian nation’s assets amid the turmoil, there are already signs that folks are creeping back. Traders piled a net $975 million into Chinese exchange-traded funds last week, more than all other developing nations tracked by Bloomberg combined.

“There’s no way that any global investor can ignore China unless there’s a complete embargo by the U.S. government,” said Mark Mobius, a veteran investor in emerging markets who spent three decades at Franklin Templeton Investments. “But that’s very unlikely.”

Despite all the risks associated with investing in the world’s second-largest economy, the sheer breadth of the market and its outsized share in key indexes means money managers often have no choice but to look past bouts of turbulence and maintain exposure.

While the latest manufacturing data out of China point to a slowdown in activity, the nascent rebound in the nation’s battered equities may have room to run if funds begin to rebuild their positions and liquidity injections restore calm in financial markets.

Unsubstantiated rumors that Washington was going to restrict funds from investing in China and Hong Kong exacerbated the rout last week, which kicked off as Beijing widened a regulatory crackdown on its burgeoning tech industry. On Sunday, China’s securities regulator called for talks with its American counterpart after the U.S. Securities and Exchange Commission halted the initial public offerings of Chinese companies.

At the height of the panic, Hong Kong’s Hang Seng index was down almost 10% from last Friday’s close. Technology giant Tencent Holdings Ltd. shed about a fifth of its value and Meituan tumbled as much as 30% in the week.

But as the dust settles, focus is already turning to the money that eventually poured back into the country’s assets after an epic stock-market bust in 2015 and amid government efforts to stem steep declines in 2018.

China makes up about one-third of MSCI Inc.’s emerging-market index, which means that it’s almost guaranteed to attract funds from money managers who track the benchmark. The promise of juicy gains will only help -- equity investors in China pocketed twice the average return across the developing world over the past decade.

“If one wants out, one could divest from China and invest the proceeds pro-rata across other countries,” said Gustavo Medeiros, London-based deputy head of research at Ashmore Group Plc. “But this is extreme.”

The economy’s closed nature can also insulate assets from volatility, with some investors even snapping up government bonds as an alternative to U.S. Treasuries. Inflows drove the yield on 10-year Chinese benchmark debt down almost 30 basis points this year, the most among major markets.

So far in 2021, total assets invested in China via ETFs reached $252 billion, compared with about $10 billion in Brazil and $2.5 billion in South Africa.

“It’s very uncorrelated with other markets so not sure you can say who else would benefit,” said Charles Diebel, a money manager at Mediolanum SpA. “Because of the size of China, no alternative exists with the same risk profile.”

Last week’s rout also offered an opportunity to buy up assets on the cheap. The forward price-earnings ratio of the Shanghai Composite Index fell to a one-year low, bringing China’s valuation discount versus U.S. stocks to 45%, compared with a 20-year average of 11.4%.

“We see this selloff as an opening to add to some of our existing positions,” said Ali Akay, the London-based chief investment officer of hedge fund Carrhae Capital, which manages about $760 million in assets, pointing to “very attractive valuations.”

That’s not to say investors aren’t scouring other emerging markets for opportunities after the shake-up. For Sergey Dergachev at Union Investment Privatfonds GmbH in Frankfurt, markets that benefit the most from lower U.S. Treasury yields such as Russia and Turkey stand out.

Still, there’s a sense that are few places within the asset class to escape if the market turns south again.

“If the selloff in China credit continues, there would not be many places to hide in EM,” said Paul Greer, a money manager at Fidelity International.