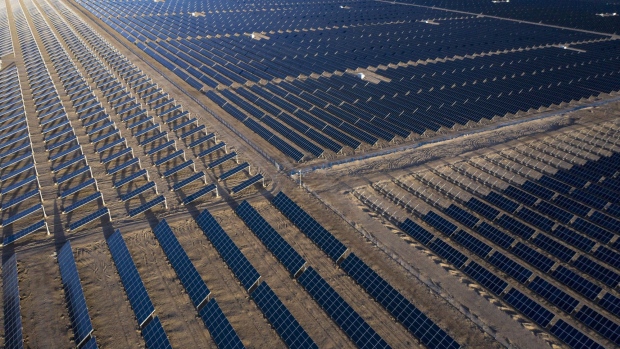 Photovoltaic modules at a solar power plant near Golmud, Qinghai province, China, on Saturday, Sept. 11, 2021. China is opening up its market for trading green energy, making it easier for multinationals from BMW AG to Airbus SE to buy wind and solar power and reach aggressive emissions goals. , Bloomberg

(Bloomberg) -- China is targeting a huge increase in power capacity over the next five years as it tries to ensure energy security while staying on course to reach long-term climate goals.

The country aims to have 3,000 gigawatts of generating capacity installed by 2025, up from 2,200 at the end of 2020, according its 14th five-year plan for energy development released Monday. The 800-gigawatt growth goal is about twice the size of India’s entire power fleet, according to BloombergNEF data.

The country also plans to boost gas production and keep oil output at high levels as it seeks to improve energy security amid rising global commodity costs, while also laying the groundwork for cleaner energy sources to eventually help it meet its climate goals. The ambitious power capacity target comes as China ramps up renewable installations, which operate for fewer hours over the year than traditional thermal plants and therefore require more capacity to generate the same amount of electricity.

Other takeaways from the plan include: