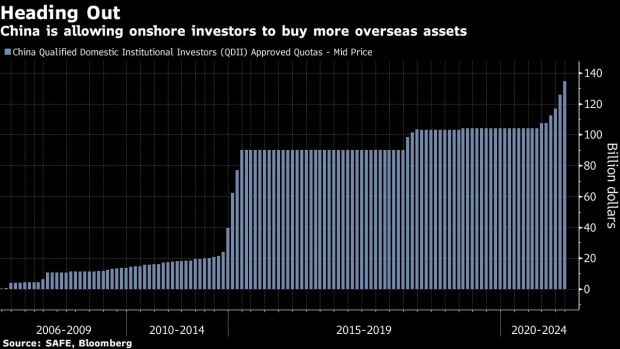 (Bloomberg) -- In 2020, China’s efforts to lure foreign funds into its borders finally paid off. Investors from New York to London clamored for its stocks and bonds, cementing the nation’s position on the global stage.

Against the wreckage of the global economy and with unprecedented stimulus unleashed by central banks, China’s resilience to the coronavirus and its higher-yielding assets looked attractive. The result was a 62% increase in overseas holdings of local stocks from a year earlier to 3.4 trillion yuan ($520 billion), a 47% for the bond market to 3.3 trillion yuan, and the Chinese currency’s best quarter in more than a decade. Foreign investors bought another net $53.5 billion worth of Chinese debt in January and February this year, according to Gavekal Dragonomics.

But that influx -- and influence -- is now creating a headache for the Communist Party. China has long been paranoid about the risks posed by capital flows, especially after a messy currency devaluation in 2015, which is why authorities maintain strict controls on money entering and leaving the country. The scale of the inflows places the country at risk of asset bubbles, which would burst were that money to start pouring out.

“The moment this demand becomes too big to manage and starts to pressure financial stability -- or create a threat or risk to financial stability -- it will be curbed,” said Paola Subacchi, professor of International Economics at the University of London’s Queen Mary Global Policy Institute and author of ‘The People’s Money: How China Is Building a Global Currency.’

Foreign presence in modern China’s capital markets has never been so great: Beijing has in recent years carved out channels to let funds in, opening stock and bond trading links via Hong Kong and pushing for the inclusion of yuan-denominated assets in major global benchmarks. The overarching goal was to help make markets more efficient and powerful. Institutions such as pension funds would provide stability to a stock market reliant on speculators, while boosting liquidity in a moribund sovereign bond market.

Global pandemic stimulus has in some ways made China a victim of its own success. This was illustrated by a November report compiled by the Asian Consultative Council of the Bank for International Settlements, which looked at the impact of capital flows. The People’s Bank of China, one of 12 central banks in the working group, noted that “sharp exchange rate fluctuations and large capital flows would threaten financial stability and have negative real economic consequences.”

Such concerns are already affecting China’s onshore markets. Expectations of strong growth in the U.S. economy are driving Treasury yields higher, narrowing the premium offered by Chinese debt by about 1 percentage point since a record in November. It’s also buoying the dollar and punishing the yuan, which in March weakened about 1.3%. The CSI 300 Index of stocks has fallen more than 10% from this year’s high.

To manage the flow, China has steadily granted additional quota for onshore funds to invest in securities overseas, in March boosting it to $135 billion -- the highest ever. Other measures include encouraging mutual funds to invest in Hong Kong stocks, which led to record flows into the city in January, and asking financial institutions to limit the amount of offshore financing. Hong Kong in December said it was discussing plans to allow mainland investors to trade bonds in the city, which would also encourage outflows.

But those steps are incremental, showing policy makers are wary of going too far the other way. China may struggle to open its financial borders without in some way being at the mercy of Federal Reserve actions, like other emerging economies. The U.S.’s easy monetary policy in the wake of the 2008 global financial crisis fueled bubbles in countries from Indonesia to Thailand, which burst when the Fed prepared to raise interest rates.

The Fed responded to the pandemic with similar policies to those of 2008 but far faster -- and further. Its balance sheet is now near $7.7 trillion, compared to $4 trillion early last year and the previous peak of $4.5 trillion in 2015. That’s equivalent to about 36% of the country’s gross domestic output, a record.

There are few economies that can absorb that kind of money. China’s $10.9 trillion equity market and $18 trillion bond market make the country an obvious target.

“China is going to be a very attractive place for capital,” said Wen-Wen Lindroth, lead cross-asset strategist for Fidelity International. “The long term growth rate – the gap they have with income – versus developed markets means they have lot more scope to develop,” she said.

The question now is how China deals with this issue, which will become even more pressing as the weighting of yuan assets in global benchmarks increases, drawing in billions of extra dollars. Allowing more outflows will reduce the risk of bubbles, but increases the potential for money to flood out too quickly -- as the country witnessed in the wake of the 2015 currency devaluation.

“China has long been very careful about opening its capital account, and that cautious approach is still the most probable one,” Wei He, China Economist at Gavekal, wrote in a March 31 report.