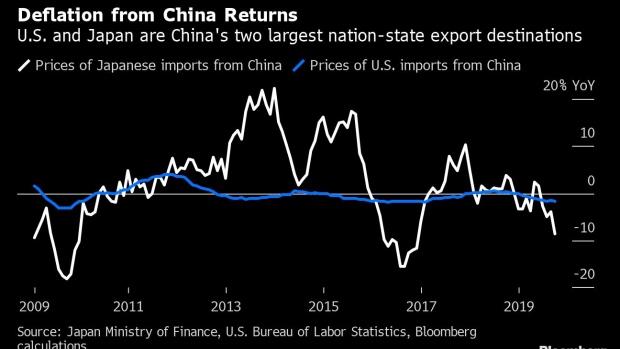 Employees sew shoe components in a factory in Wenzhou, China, on Monday, Jan. 14, 2019. The Chinese government's effort to pivot from being the world's supplier of goods to a nation that's increasingly competing for technological dominance is shaking up the global order. Photographer: Qilai Shen/Bloomberg , Bloomberg

(Bloomberg) -- Chinese factories are again threatening to drag down prices around the world as the cost of their goods decline by the most since 2016.

In a fresh challenge to the ability of global central banks to revive inflation, China’s slowest growth in almost three decades and cheaper energy costs have left manufacturing prices declining since July.

While cheaper goods may be a boon to foreign consumers as Christmas nears, the overall effect is a potential spiral of falling prices worldwide as companies everywhere are forced to compete with Chinese rivals to protect profits. That would add further tension to the U.S.-China trade war.

“Inflation is increasingly driven by global factors, and in particular, by waves of disinflation emanating from China,” according to Stephen Jen and Joana Freire at Eurizon SLJ Capital. “This is related to China exporting its overhang of capacity” which has been exposed by weak domestic demand, trade tensions with the U.S., and lack of economic stimulus.

They expect the recent worsening of the producer price index to weigh on inflation rates in the U.S. and Europe, similar to what happened in 2014-16. Producer prices in Germany, Japan, South Korea and the U.S. are already negative.

Data released on Saturday underscored the problem, with Chinese producer prices dropping for a fourth month in October. Input costs and energy prices have fallen since June, reducing costs for producers. However, those savings haven’t boost companies’ margins as demand isn’t strong and there’s plenty of excess capacity, so manufacturers have also cut asking prices.

A key problem is that while prices deflate, loans don’t, making it harder still for China’s indebted industrial sector to make ends meet. Chinese private companies are already defaulting on their bonds at twice the rate this year compared with 2018, and the government is worried about the health of the banking sector.

U.S. tariffs are diverting China’s excess capacity and supply to third countries, and more companies and nations are likely to feel the deflationary pressures, according to Chua.

The deflation risk reflects China’s heftier role in the world economy and how for many industries it is a price setter. It made up 12% of total global trade in 2018, the largest single country. Chinese price shocks accounted for about 6% of average inflation globally, according to a 2016 analysis by Bundesbank economists.

Similar to what happened in 2014-2016, a flow of cheaper goods from China will make it harder for central banks elsewhere to generate sustained inflation. Consumer prices in Japan, Germany and the U.S. are already below their inflation targets of around 2% a year, and further declines in the price of imports and manufactures will only make it harder to reach those goals.

China is the biggest source of imports for the U.S. and Japan, and the second-biggest for Germany, after the Netherlands.

The effect of the slide in the price of exported Chinese goods is already appearing in the data of some of those trading partners, with the prices of Chinese machinery, metals, cloth, and chemicals imported by Japan all dropping, and the price of U.S. imports also in decline. Germany and South Korea don’t provide a breakdown on the price of imports from China.

In addition to falling PPI, discounts by Chinese companies to compensate for tariffs may be having an effect on the price of goods sent to the U.S., and some of the decline in export prices is likely due to the yuan weakening against the dollar, making Chinese goods cheaper for companies in many countries.

Still, China’s producer deflation is nowhere near as bad as the low of -5.9% seen in 2015, and much of the current drop is due to cheaper energy and commodity prices, according to Michael Shaoul of Marketfield Asset Management. If energy prices stay stable, China’s factory prices may become neutral, he said.

Economists expect producer prices to bottom out in the fourth quarter before recovering slightly.

As for consumer prices in China, the overall measure is actually rising as soaring pork prices push up foods costs. That’s caused global bacon prices to increase and is pushing up the cost of other meats.

“China’s PPI deflation is a result of both weak commodity prices and weak domestic demand,” according to Chi Lo, Greater China economist at BNP Paribas Asset Management. “The China factor is disinflationary at this point but not deflationary.”

--With assistance from Michelle Jamrisko and Scott Lanman.

To contact the editors responsible for this story: Jeffrey Black at jblack25@bloomberg.net, James Mayger, Malcolm Scott