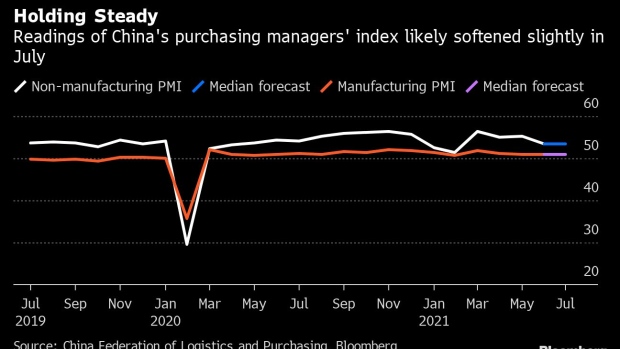 (Bloomberg) -- China’s factory conditions likely stabilized in July, implying a more steady recovery in the economy in the second half of the year as growth risks mount.

The official manufacturing purchasing managers’ index, due to be published Saturday, is forecast to slip slightly to 50.8 in July from 50.9 in June, according to a Bloomberg survey of economists, remaining above the 50 line that separates expansion from contraction.

The non-manufacturing gauge, which measures activity in the construction and services sectors, is expected to have softened to 53.3 from 53.5 in the previous month.

A shortage of computer chips and electricity in July likely weighed on factory output, although export demand continues to be a strong support for the sector. Recent Covid-19 outbreaks, like in Jiangsu province, a major manufacturing hub, are also a worry, threatening to hamper some production and weigh on consumer spending.

The data come as top Communist Party officials meet at a key Politburo meeting this week to review the economy’s performance in the first half and set policy priorities for the rest of the year. Economists expect the leadership to signal a shift toward more monetary and fiscal support as growth gradually slows.

Construction activities likely stayed stable or contracted slightly in July as local governments slowed the pace of special bond sales used to finance spending on infrastructure like highways and houses.

The PMI forecasts are largely in line with a set of early indicators tracked by Bloomberg, which showed China’s economy continuing to recover at a stable pace in July, though with some signs of weakness. Property sales slumped, small business confidence slipped and the stock market fell, the latest gauge showed.

Officials expect the recovery to remain stable in the second half of the year but have warned of some downward pressure on growth, including a likely slowdown in trade.