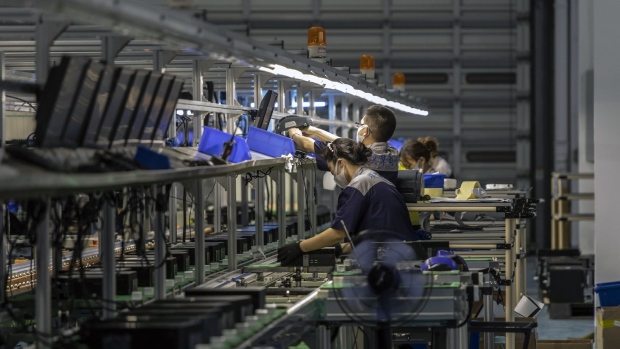 Employees on an assembly line for refurbished computer consoles at the Sketch Global facility in the Lingang Special Area and Comprehensive Zone in Shanghai, China, on Thursday, Aug. 25, 2022. Lingang, a 120-square-kilometer (46 -square-mile) patch of land southeast of Shanghai roughly a sixth the size of Singapore, was designated by Chinese President Xi Jinping in 2018 as the country’s top free-trade area, to be modeled after the likes of Singapore and Dubai. Photographer: Qilai Shen/Bloomberg , Bloomberg

The producer price index fell 1.3% in November from a year earlier after declining by the same magnitude in October, the National Bureau of Statistics said Friday. Economists surveyed by Bloomberg had expected a 1.5% drop in prices.

Consumer inflation eased to 1.6% from 2.1% in October, in line with economists’ projections. Core inflation, which excludes volatile food and energy prices, was unchanged at 0.6%.

The data suggests “economic momentum continued to weaken,” said Zhang Zhiwei, president and chief economist at Pinpoint Asset Management. “I expect the government will do more to boost market and household confidence. The fast pace of reopening indicates the government’s sense of urgency.”

The weak figures give the People’s Bank of China some space to ease monetary policy — including a possible interest rate cut — even as the Federal Reserve and other major central banks are expected to keep hiking rates into early next year.

In a recent Bloomberg survey, economists expected the PBOC to lower the interest rate on the medium-term lending facility rate in the second and third quarters of 2023, while also lowering the one- and five-year loan prime rates by March. A cut to the reserve requirement ratio for banks could also happen.

More stimulus may also be needed as China’s path toward exiting Covid Zero remains uncertain, given a likely surge in infections that would spur more economic disruption.

Record-high Covid cases in November, followed by sporadic outbreaks and movement curbs, curbed economic activity last month. Both the manufacturing and services sectors took a big hit in the month, while trade contracted at a steeper pace.

Since then, Beijing has announced several significant steps toward rolling back its strict Covid Zero policy and the government has signaled a focus on boosting economic growth next year.

Producer prices slipped into deflation in October for the first time in nearly two years as global growth softened and commodity costs continued to slide. The drop in November was due to a high base of comparison with last year, according to a statement from Dong Lijuan, chief statistician at the NBS. PPI skyrocketed in 2021 on soaring commodity prices.

“China’s steady PPI reading in November — relative to expectations for a decline deeper into deflation — suggests price pressures are letting up a little. Even so, broad CPI disinflation remains the trend. The bigger picture is that reopening should start to buoy demand, supporting prices in the coming months. That won’t get in the way of a rate cut in 1Q23 — the People’s Bank of China will have room to ease and the motivation: the economy needs the support.”

Price declines in chemical raw materials, along with chemical product and fiber manufacturing all widened in November.

Consumer prices, meanwhile, have been kept in check by Covid disruptions that have depressed movement and spending — a contrast to major developed nations that are battling persistently high inflation. Dong attributed November’s easing in part to the continued virus outbreaks.

In the CPI basket, transportation prices dropped 2% from a year earlier, while rent prices slid 0.7%.

Economists expect China’s gross domestic product may expand around 3% this year, far lower than a government target given in the spring of about 5.5%.

--With assistance from April Ma.