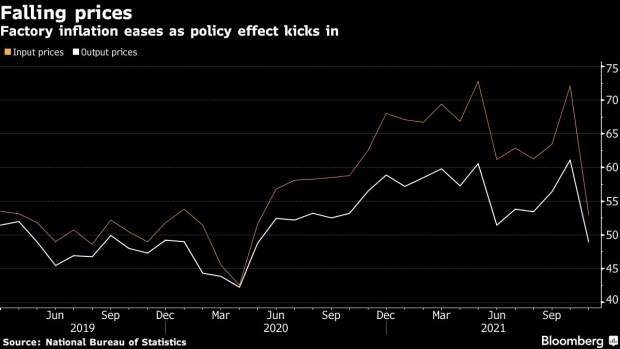 A worker stands in front of a machine on a yarn production line at the Fujian Strait Textile Technology Co. factory in Putian, Fujian province, China, on Monday, Feb. 8, 2021. China may have got its control of Covid down to a handful of new cases per day, but the restrictions, quarantines and travel curbs to keep it that way have forced millions of factory workers to give up the idea of a traditional family gathering. Photographer: Qilai Shen/Bloomberg , Bloomberg

(Bloomberg) -- China’s factory inflation may have peaked and started slowing in November, providing some relief for companies and making room for the central bank to do more to support the economy.

The producer price index is forecast to have climbed 12.1% in November from a year earlier, slower than the 26-year high of 13.5% in October, according to the median estimate in a survey of economists. Despite the retreat, the projected increase would still be the second fastest in 26 years.

Faster inflation in China in recent months fanned stagflation concerns amid a domestic economic slowdown and worries about persistent global inflation. It also increased the challenge for the People’s Bank of China on how to stimulate growth without adding to inflationary pressures, so slower price rises may make it easier to add stimulus.

The central bank acted to release 1.2 trillion yuan ($189 billion) into the economy, announcing Monday it would reduce most banks’ reserve requirement ratio by 0.5 percentage point from next week. While the central bank said this wasn’t the start of an easing cycle, financial markets are showing some expectation of further action.

Read more: China’s Policy Pivot Has Traders Wondering How Far It Will Go

The Communist Party’s top leaders also indicated earlier this week that their focus for the coming year is stabilizing macroeconomic conditions and signaled an easing of some property curbs next year, as a real estate downturn and sporadic virus outbreaks weigh on the economic outlook.

A milder pace in price hikes show previous government measures to boost commodity supplies and tame surging costs are having some effect. Iron ore prices continued dropping in November, although they have started to climb again this month. An easing power crunch also helped to lift caps on factory output which had boosted prices.

The falling inflation trend can also be seen in the price sub-indexes of China’s manufacturing purchasing managers index. Input prices for manufacturing dropped sharply in November to 52.9 from 72.1, while output prices plunged to 48.9 from 61.1.

Consumer inflation is forecast to have risen faster, quickening to 2.5% from 1.5% in October and potentially hitting the highest level since mid-2020. The pickup has been driven by more expensive food, with vegetable and fruit prices continuing to rise rapidly while pork has started to become pricier.

Even so, a deflationary drag from pork prices will likely continue for a while due to the low base for comparison from last year. The rise in core CPI is still muted, as it excludes more volatile food and energy prices, and sporadic Covid-19 outbreaks likely continue to weigh on services consumption.

The National Bureau of Statistics is scheduled to release the November inflation data at 9:30 a.m. Thursday Beijing time.