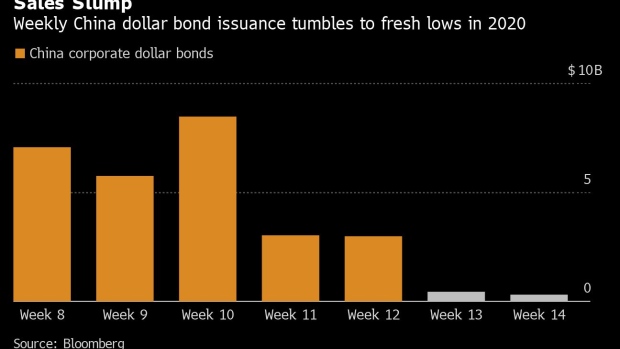 A 2017 50 subject uncut sheet of $1 dollar notes bearing the name of U.S. Treasury Secretary Steven Mnuchin sits on display at the U.S. Bureau of Engraving and Printing in Washington, D.C., U.S., on Wednesday, Nov. 15, 2017. A change in the Senate tax-overhaul plan that would expand a temporary income-tax break for partnerships, limited liability companies and other so-called \"pass-through\" businesses won the endorsement of a national small-business group today. Photographer: Andrew Harrer/Bloomberg , Photographer: Andrew Harrer/Bloomberg

Beijing’s grip over capital markets is being tested by Chinese companies’ exposure to the offshore bond market, where $87.3 billion owed by the nation’s firms comes due this year.

Corporate credit held up well domestically as the coronavirus pandemic smashed global financial markets, with spreads for AA-rated local bonds (the equivalent of junk) falling to a three-year low. But the opposite was true for offshore debt. Yields for China junk bonds soared to as high as 14.1% in late March, an eight-year record and highest among the world’s other big markets.

The divergence shows the limits of the government’s influence outside of mainland China’s borders. The central bank has been able to keep funding costs near multi-year lows within the nation, easing the debt burden on local companies. In the dollar market, local firms were caught up in the panic selling as investors rushed to get hold of greenbacks. The result has been spiking yields and a plunge in new issuance.

“Beijing simply lacks the firepower or the will to backstop everyone,” said Brock Silvers, a managing director at Adamas Asset Management in Hong Kong. “Domestic investors will rightly accept a request for ‘flexibility’ as something more than a mere request. Offshore investors, however, may not be so easily convinced.”

Adding to the pain, efforts by global central banks to provide liquidity has failed to lower Chinese companies’ offshore borrowing costs. Unprecedented stimulus, including an aggressive program of buying corporate debt, by the Federal Reserve and the European Central Bank reinvigorated investors’ appetites for risk in those markets. But those moves have yet to shift global sentiment, and China’s concentrated its intervention in the domestic market.

China does have considerable levers offshore. State-backed brokerage houses, asset management companies and banks have been boosting their presence in Hong Kong. Chinese firms made up six of the top 20 bookrunners for Asian offshore bond deals last year, up from just two a decade earlier.

The government could encourage those firms to, for example, provide bridge funding to troubled debtors, said Soo Cheon Lee, chief investment officer at global banking and asset management group SC Lowy. “Beijing will have some leverage with those people,” he said.

Policy makers could decide to relax restrictions on domestic investors as a way to spur flows offshore. So far they’ve said they won’t, keeping dollar investors on edge. As of now, offshore investments by “qualified domestic institutional investors” have been nearly exhausted, according to Zou Chuan, deputy chief executive officer of Tianfeng International Securities Group Ltd.

“We hope policy makers will open the front door to offshore markets by lifting restrictions to the QDII quotas, thereby allowing hundreds of billions of dollars to flow into the Chinese dollar bond market,” Zou said.

Chinese authorities have been reluctant to allow domestic funds to tap overseas markets. In the past five years, the government has tightened controls on outflows, even as it increasingly opened its borders to foreign capital.

Still, pressure on officials to act to ease the strain on Chinese companies’ offshore obligations is likely to grow. Junk bonds comprise nearly a quarter of the dollar debt coming due this year, and China’s riskiest firms will face soaring costs and reduced demand just as the outbreak weighs on first-quarter performance.

Developers are particularly vulnerable. They have issued record volumes of debt for the last two years and need to refinance or repay $22.2 billion in dollar bonds in 2020, Bloomberg-compiled data show. For now, real estate developers have been leaning on cheaper borrowing costs in the domestic market.

China Fortune Land Development Co. issued a 5.5% yuan bond due 2025 late March. By comparison, its dollar bond due the same year was yielding as much as 19.9% in the secondary market when the local note priced.

The sluggish primary market isn’t expected to return to pre-outbreak levels anytime soon. Firms have been able to withstand the initial pressure, and those bolstered by earlier issuance or existing cash stockpiles will be able to hold on for a while.

But, says Samantha Xie, head of debt capital markets at JPMorgan Chase & Co., if this situation continues until the end of May, weaker players, in particular those in the real estate sector or other high yield borrowers, may come under new pressure.