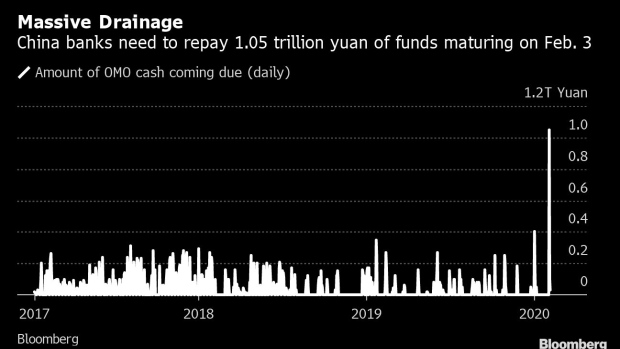 Pedestrians walk past the Bund Bull statue in Shanghai, China, on Monday, July 29, 2019. Chinese trade negotiators will host their U.S. counterparts at a landmark of jazz-era Shanghai on the city's riverside Bund, re-opening trade talks with a marked change of atmosphere after an almost three-month hiatus. Photographer: Qilai Shen/Bloomberg , Bloomberg

(Bloomberg) -- Every other market has already reacted to the deadly virus threatening China’s economy. Soon it will be China’s turn, and it’s likely to be brutal.

Stocks and commodities will almost certainly sink when financial markets reopen Monday for the first time since Jan. 23, while bond yields will drop. For equities, the declines are likely to be exacerbated by the amount of leverage in the market -- near the highest in 11 months. That could create a downward spiral where steep losses become steeper as traders face margin calls.

As an example of how extreme selling can be: In May the Shanghai equity benchmark fell almost 6% when it resumed trading following a holiday break on negative trade-war news.

Adding to the nervousness is what’s set to be the largest liquidity event of its kind in China, with banks due to repay more than 1 trillion yuan ($143 billion) in short-term funds. The daily yuan reference rate will also be closely watched after the currency weakened past 7 per dollar in offshore trading for the first time this year.

The total death toll has risen to 213 while confirmed cases in China jumped to 9,692, the National Health Commission reported Friday, up from about 7,700 a day earlier. A number of Chinese provinces and cities have extended the Lunar New Year break until the end of Feb. 9, including Shanghai, which may limit trading.

“The market is bracing for the bearish impact -- I’m looking at one-sided bearish movement on Monday, and potentially for the foreseeable future until the situation improves,” said Mingze Wu, a trader at INTL FCStone in Singapore, adding that authorities may try to reduce volatility by injecting cash and setting a strong yuan fixing.

The onshore equity market has no circuit breakers limiting index losses after the implementation of such measures backfired following the bursting of the country’s bubble in 2015. Shares trading on the main boards are allowed to move 10% daily in either direction -- it’s 20% for the experimental Star board -- and there’s a lack of index futures, volatility products and single-stock options onshore. The absence of derivatives makes it difficult for investors to hedge.

What’s certain is that traders expect Beijing will put a floor on losses. In addition to a large cash injection, the central bank could also deploy other longer-term funding tools to ensure adequate liquidity in the financial system. The so-called national team of state funds may also buy stocks, though there have been no obvious signs during recent downturns.

“In this time of urgency, we expect them to do it,” said Louis Tse, Hong Kong-based managing director at VC Asset Management Ltd, referring to open-market operations. “They will just do it. If they don’t, they must have a good explanation, or deploy a better monetary-policy tool to compensate for the situation.”

China is also being increasingly isolated in terms of global travel. The U.S. government told Americans not to travel to China and said those currently visiting or living in the country should try to leave. The new travel advisory came hours after the World Health Organization declared the outbreak a global health emergency.

Below is a guide of what to watch as investors in China are given the opportunity to trade for the first time since Jan. 23.

The yuan has weakened in offshore trading, sinking through 7 per dollar Thursday. That’s increased its discount versus the mainland rate to a level that’s near the widest since August. Traders will be watching where the central bank sets its daily reference rate, as it limits the onshore yuan’s moves to 2% in either direction. The currency last traded at 6.9368 per greenback.

Some 1.05 trillion yuan of central bank funding is due, as the 600 billion that was originally maturing Jan. 31 gets added to Monday’s 450 billion yuan. That’s the largest single-day maturity since at least early 2016, when the central bank began conducting daily open-market operations.

The People’s Bank of China is widely expected to roll over at least some of the funds. It said in a statement this week it will use monetary tools -- including open-market operations -- to ensure ample liquidity.

FTSE China A50 Index futures lost about 6% since Jan. 23, suggesting a painful reopen for the mainland market. Hong Kong’s Hang Seng Index sank 5.4% in the two days following the break, while Taiwan’s stock market opened with its biggest plunge since October 2018. A drop of 2.8% or more for the Shanghai Composite Index would be its worst start to a Lunar New Year in at least 20 years.

Risk-off sentiment and intensifying bets for monetary easing mean money-market rates and government-bond yields are likely to fall. The yuan’s five-year non-deliverable interest-rate swaps, an indicator of bets on the currency’s borrowing costs, tumbled to the lowest since August 2016 in offshore trading this week. They’re at the deepest discount since 2015 relative to their onshore counterparts.

Iron ore, steel and coking coal futures in Shanghai are expected to sink as the sector seeks to quantify the impact of disruptions. Mills may face difficulties in obtaining raw materials and construction activity will slow as workers struggle to return to their home cities. Chinese iron ore futures will catch up with tumbling prices in Singapore, and copper may track prices in London, which have posted a record slump and dropped to the lowest since 2017.

In agricultural markets, watch palm olein after a volatile week for benchmark Malaysian palm oil futures, including the biggest one-day drop in more than a decade. Soymeal futures may also see declines on concern demand for meat will drop as people rein in spending and avoid eating out at restaurants.

The outlook for rubber is less clear. Volatility has surged for contracts traded in Tokyo and Singapore as the market grapples with whether a slowdown in economic growth will hurt demand or consumption will jump as glove makers ramp up production.

To contact the editor responsible for this story: Richard Frost at rfrost4@bloomberg.net