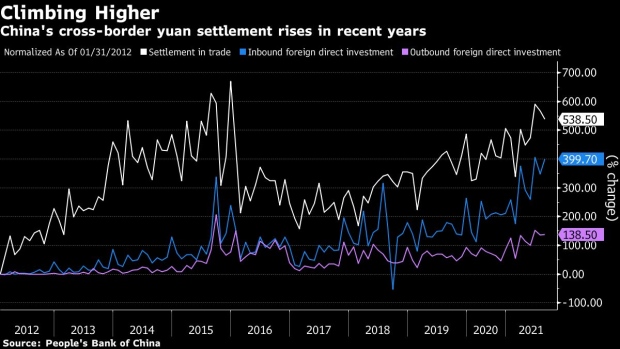 (Bloomberg) -- China is quietly growing its homegrown payments system to allow cross-border transactions in yuan as trade and investment with the rest of the world grows and Beijing makes a bigger push to globalize the local currency.

Cross-Border Interbank Payment System, run by CIPS Co. Ltd. and launched by the central bank in 2015 to settle international claims in yuan, will increase the number of direct participating banks using the system to nearly 80 by the end of this year from the current 71, Xu Zaiyue, chief executive officer of CIPS, said in an interview.

“The expansion will make it more convenient for global clients to use CIPS services,” said Xu. “We hope to provide services all around the globe one day, and especially to facilitate services to overseas participants.”

Based in Shanghai and employing over 100 people, CIPS counts three dozen domestic and foreign banks like HSBC Holdings Plc and Standard Chartered Plc. as its shareholders, as well as financial market infrastructure operators.

The payments system was created to boost the global use of the yuan, which remains small compared to the size of China’s economy. The share of yuan payments via Swift -- the Society for Worldwide Interbank Financial Telecommunication, which dominates the international payments system -- stood at 2.2% in July.

CIPS is also seen as a possible alternative to the U.S.-dominated global settlement system comprising of Swift and Clearing House Interbank Payments System. Trade and political tensions between the world’s two biggest economies have threatened to spill over into the financial sector, which some have warned could mean China is cut off from networks like Swift.

CIPS is currently laying the technical groundwork to prepare for the internationalization of the yuan, which will happen as a natural result of China’s economic development and opening up, Xu said. The company has adopted ISO20022, the emerging global and open standard for payments messaging, he said.

“The way we ‘go out’ is by adopting the international standards,” said Xu. “We hope that after a period of time, there will be CIPS services wherever there is yuan.”

The average daily transaction volume of CIPS reached 317.2 billion yuan ($49 billion) in August, up from about 190 billion a year ago, according to data provided by the company. It had 1,144 indirect participating banks in 103 countries by the end of August, of which 531 were located within mainland China.