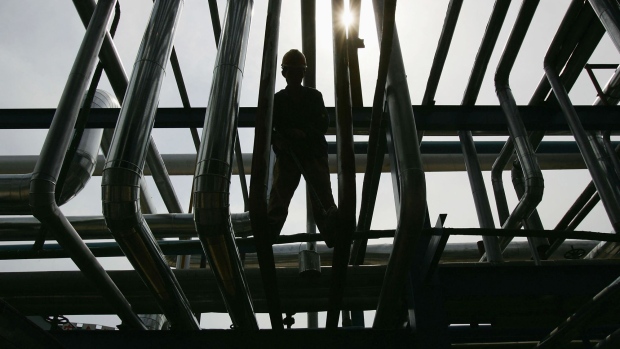 LUOCHUAN COUTY, CHINA - MAY 25: An employee works at the Yanlian Oil Refinery May 25, 2005 in Luochuan County, Shaanxi Province, China. About 50 percent of China's oil and natural gas supply will be imported by 2020 due to the growing gap between domestic demand and production, according to the Xinhua news agency. As China's domestic production of oil has failed to keep up with booming economic growth and demand from the auto market, the country has been trying to gain access to foreign supplies of oil and natural gas, the report said. China produced 175 million tons of crude oil last year. (Photo by Andrew Wong/Getty Images) , Photographer: Andrew Wong/Getty Images AsiaPac

Gasoline exports in 2021 slid 9.1% from a year earlier to 14.54 million tons, the lowest level in three years, government data show. That’s equivalent to about 333,000 barrels a day, according to Bloomberg calculations. China shipped the least amount of diesel since 2017, down 12.9% year-on-year.

Exports slipped last year after state-run refiners were forced to provide more fuel to the domestic market to make up for a shortfall from independent oil processors. Supply from private operators declined after a consumption tax was levied on blending feedstocks. China has also been curbing exports to achieve its green goals of peak carbon emissions by 2030.

The fuel export quota for 2021 was 36% lower than 2020, or 21.4 million tons less, according to consultant OilChem. That trend looks like it will continue in 2022 after China slashed its quotas in the first allocation for the year.

A quota of 13 million tons was granted in the first batch, including both general trade and tolling issuances, according to refinery officials with knowledge of the matter. That’s 56% less than the 29.5 million tons in the same batch for 2021. Consultant JLC predicts the overall allocation will be 40% lower in 2022.