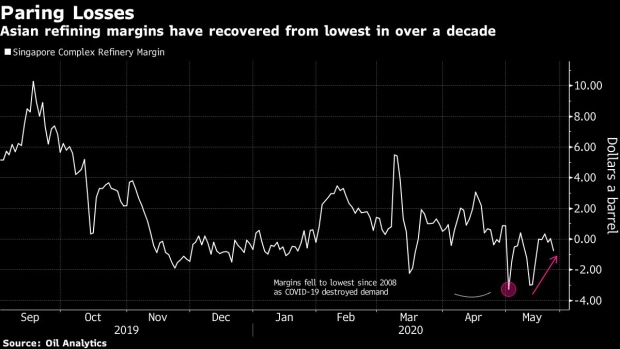 An employee refuels a vehicle at a PetroChina Co. gas station at night in Hong Kong, China, on Monday, Aug. 21, 2017. PetroChina is scheduled to report the second-quarter earnings on Aug. 24. Photographer: Vivek Prakash/Bloomberg , Bloomberg

(Bloomberg) -- As China’s demand recovery outpaces the rest of Asia, falling fuel exports from the refining giant are providing a much-needed buffer for other processors in the region still grappling with lowered consumption and poor margins.

China is curbing exports with refiners selling fuels locally amid a rebound in demand and move to cash-in on higher prices due to a government-imposed “floor price,” said traders and analysts. Shipments so far this month have halved from April and are a quarter of the monthly average in the first quarter, according to Kpler.

The cuts have coincided with plant closures and maintenance across South Korea, Australia, Indonesia and the Philippines, tightening supplies and pushing prompt prices against later shipments in the narrowing of so-called contango. As refineries return to operation, however, the market rebalancing will depend on a sustained demand rebound.

China’s refiners are being discouraged from sending fuels abroad due to weak demand from fuel-importing nations such as Indonesia, and lower export prices when compared with domestic sales, said Yang Xia, analyst with SCI99. Shipments are likely to continue falling this quarter, according to the industry consultant.

On average, Chinese fuel marketers who sold cargoes abroad in April had a theoretical loss of 932 yuan a ton for gasoline and 1,486 yuan a ton for diesel, as opposed to domestic sales, data by SCI99 showed. The nation exported 400,000 barrels of clean fuels so far this month, according to Kpler.

As lockdowns across Asia eased, diesel has become one of the strongest performers as industrial activity returned. In Singapore, margins for the fuel have climbed more than 80% from its bottom in mid-May, while producing gasoline flipped into a profit last week before slipping into losses. Commuters who chose to drive their cars over traveling on public transport are boosting demand for the motor fuel.

These gains, however, are at risk of being eroded as more refineries return from planned maintenance or consider higher operating rates with demand still well below pre-virus levels. If that happens, balances may potentially flip back into deep oversupply, weighing on margins, said the traders and analysts.

Floating storage of clean fuels off Singapore -- while still sizable -- is beginning to shrink. The glut that’s seen as a proxy for the region’s fuel consumption and economic health had made its way into tankers during the peak of coronavirus lockdowns when excess fuel had no where to go.

Despite several bullish signs across Asian fuel markets, the near-term recovery in margins appears to be more related to supply cuts rather than thriving consumption, according to the traders and analysts.

In India, one of Asia’s top fuel guzzlers, demand for gasoline and diesel were recovering, but remains about 40% below last year’s levels and could take until the end of 2020 to get close to full recovery.

“They will have to juggle high product inventories and demand recovery,” said the Singapore-based analyst, adding that refiners may increase runs cautiously in the coming month. Another cautionary point is the possibility of a second wave of infections, which could stymie nascent recovery, she said.