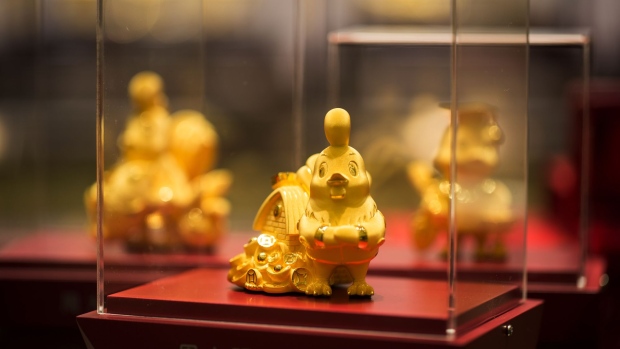 Gold chick figurines sits on display inside a Chow Tai Fook Jewellery Group Ltd. store in the Central district of Hong Kong, China, on Friday, Jan. 20, 2017. Chow Tai Fook, the world's largest jewelry chain, last year launched the first of a line of mainland shops selling lower-priced jewelry, with average prices of 2,000 yuan ($291), about a third the prices at its flagship stores. , Bloomberg

China just hit the pause button on its gold-buying spree.

The People’s Bank of China kept holdings level 62.64 million ounces in October, unchanged from a month earlier, according to data on its website on Thursday. That holding pattern follows 10 straight months of accumulation that have boosted the nation’s stockpile by more than 100 tons.

Central-bank purchases have been an important feature of the global market this year, with official sector demand helping to support gold prices and offset a drop in demand from consumers. The backdrop to Beijing’s accumulation has been the nagging trade-war with the U.S., which has hurt growth.

Gold for immediate delivery traded 0.3% lower at $1,486.56 an ounce at 4:33 p.m. in Beijing, with losses following a statement from China that it’s agreed with Washington to roll back tariffs on each other’s goods in phases as the two sides work toward a deal. The precious metal is still up 16% this year.