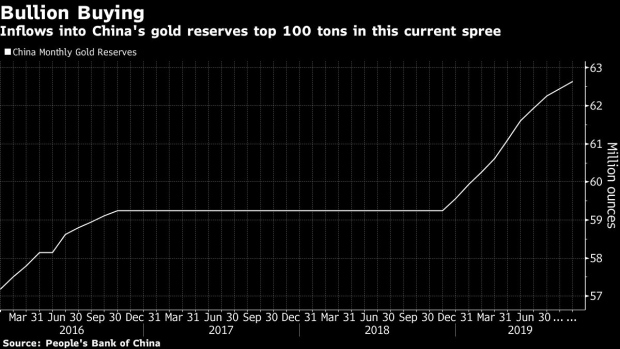 (Bloomberg) -- China has added more than 100 tons of gold to its reserves since it resumed buying in December, reinforcing its standing as one of the major official accumulators as central banks stock up on the precious metal.

The People’s Bank of China picked up more gold last month, raising holdings to 62.64 million ounces in September from 62.45 million in August, according to data on its website. In tonnage terms, the latest inflow totals 5.9 tons, and follows the addition of about 99.8 tons over the prior nine months.

While a 10th straight month of accumulation marks a steady buying pattern for the PBOC, China has in the past gone for long periods without disclosing moves in gold holdings. When the central bank announced a 57% jump in reserves to 53.3 million ounces in mid-2015, it was the first update in six years.