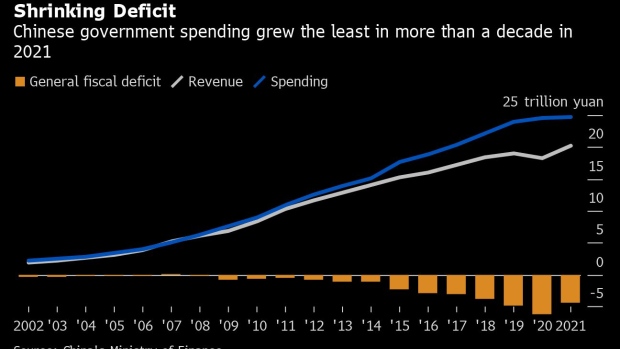 General fiscal expenditure came in at 24.63 trillion yuan ($3.9 trillion), up 0.3% from the previous year, Vice Finance Minister Xu Hongcai told reporters at a Tuesday briefing. That was the weakest pace since 2003, according to Bloomberg calculations based on the ministry’s data.

At the same time, the government raked in 20.25 trillion yuan of general fiscal revenue last year, up 10.7% from the previous year, Xu said. That left a deficit of 4.4 trillion yuan, the smallest since 2018, Bloomberg calculations show.

Revenue exceeded the projection in last year’s government budget, which will “provide funding support for us to maintain the strength of spending this year and grant more financial help to governments at lower levels,” Xu said.

China’s policy makers have switched to a pro-growth stance amid a housing market slump and resurgence in Covid cases, which has weighed on consumption. To counter the slowdown, the central bank has cut interest rates and lowered the amount of cash banks must keep in reserve.

Monetary easing will have only a limited effect in spurring growth though, with analysts calling on the government to boost fiscal stimulus as well.

The weak increase in general government spending indicates fiscal policy likely tightened in the second half of last year, a key reason for the deceleration in economic growth, said Ding Shuang, chief economist for Greater China and North Asia at Standard Chartered Plc.

“Policy is now shifted and fiscal policy will be expanded this year,” he said, estimating at least 2 trillion yuan of funds left over from last year will be spent in 2022.