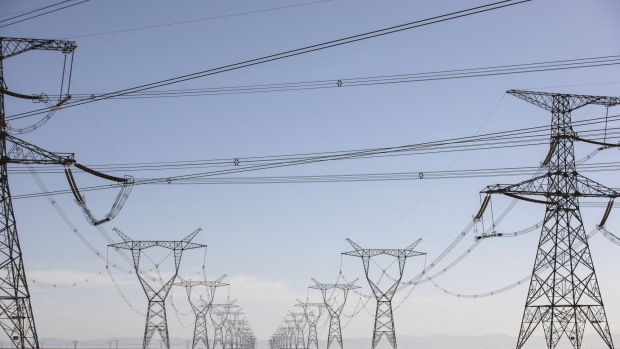 Power lines carrying electricity from the Golmud Solar Park hang from transmission towers on the outskirts of Golmud, Qinghai province, China, on Wednesday, July 25, 2018. China has emerged as the global leader in clean power investment after it spent $127 billion in renewable energy last year as it seeks to ease its reliance on coal and reduce smog in cities, according to a report jointly published by the United Nations and Bloomberg New Energy Finance in April. Photographer: Qilai Shen/Bloomberg , Bloomberg

(Bloomberg) -- China’s biggest grid company will create a forum that’ll allow for widespread power trading across provinces, part of the government’s efforts to smooth out supply and enhance the availability of clean energy.

The new spot market to allow generators and their customers to buy and sell electricity will be hosted on the Beijing Power Exchange Center, State Grid Corp. of China said Wednesday. The announcement preceded comments from President Xi Jinping calling for a better nationwide system for sharing power, which were reported by the official Xinhua News Agency.

State Grid is seeking to build “a new power system dominated by new energy” that can help China achieve its carbon targets, the government-owned company said in a statement. It didn’t give a start date.

The market will let clean energy companies freely sell their electricity, which after years of government subsidies is now competitive with coal, the nation’s mainstay fuel. It should also help customers better deal with power shortages, which have wracked the economy this year.

Most of China’s power is sold on a long-term basis. Its current spot trading system allows only surplus renewable energy to be bought and sold across provinces, and for coal-fired power to be traded within provinces.

State Grid runs the power system in all but five of China’s 31 provinces and regions, connecting the renewable-rich western areas of Qinghai and Inner Mongolia with the power-hungry cities nearer the coast. The need to facilitate more cross-regional power transmission has become more acute after Xi last month announced plans to build a massive amount of solar and wind capacity in the country’s interior.

The new market will help transmit more power over long distances, and allow it to trade at prices that reflect immediate supply and demand, said Hanyang Wei, an analyst at BloombergNEF in Beijing.

“When coastal Zhejiang province is running short of electricity, the wind and solar plants in inland Ningxia may receive a higher tariff by delivering the power that’s desperately needed,” Wei said.

The government said in September it would significantly expand green power trading centers that facilitate contracts between renewable energy companies and electricity distributors and users.