China’s suspension of Canadian pork imports could upend North American meat trade flows at a time when the world is already feeling the disruptive pressures of African swine fever.

On Tuesday, the Chinese embassy in Canada said imports of the meat were halted due to counterfeit health certificates, threatening to derail pork exports that had jumped 50 per cent so far this year over 2018 levels.

Now, Canadian supply originally intended for the Asian nation could end up looking for a new home in the U.S. and elsewhere, according to traders and analysts. The U.S. is already facing a glut of meat, while at same time supplies are being squeezed in Asia by the spreading deadly pig disease.

Protein shippers across the world have been vying for share of the Chinese import market after an outbreak of the deadly African swine fever virus resulted in millions of hogs being culled in the world’s top consumer of the meat. The suspension for Canada will likely hold producers there back from filling Asia’s protein gap, at least for now.

“It’s unfortunate -- these sorts of things don’t help anybody and it will cause problems for our industry,” said Daryl Possberg, a producer with Polar Pork Farms, outside of Saskatoon, Saskatchewan. 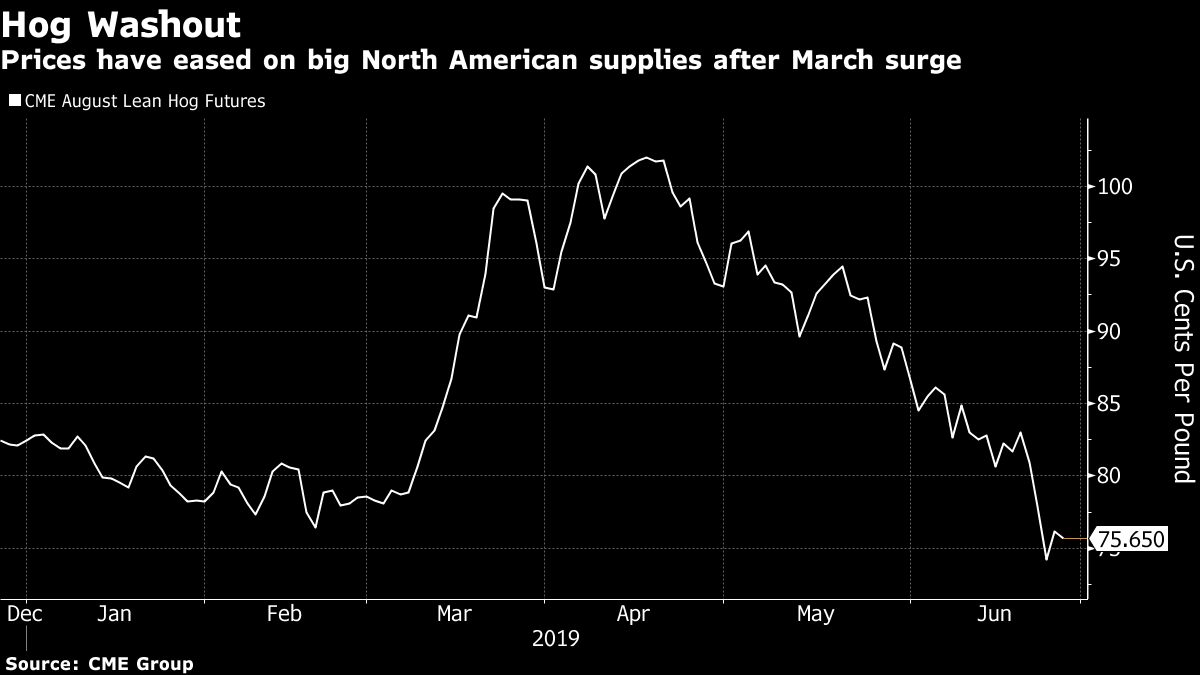 On Wednesday, hog futures in Chicago for August delivery fell as much as 2.2 per cent to 74.525 cents a pound, before settling 0.9 per cent lower.

Some pork intended for China from Canada may move into the U.S. instead, said Joe Kerns, president of animal agriculture consulting firm Kerns and Associates in Ames, Iowa.

“We have too many hams on the market, the product will have to move somewhere and the cross-border transit seems to be the easiest in the short term,” he said in an email.

Hog producers in the U.S. have been lifting production in the hope of shipping more pork to China. Analysts surveyed by Bloomberg expect the U.S. Department of Agriculture on Thursday to show the hog herd as of June 1 was up 2.6 per cent from a year ago.

China is asking Canada to suspend all meat exports amid heightened trade tensions. Eric Miller, president and founder of the Rideau Potomac Strategy Group and advisor to Canada's deputy minister of international trade, explains how this is a political move ahead of the G20 Summit.

But the U.S. is still also facing tariffs from China, which could limit how much the Asian nation buys. So in the end, the world could end up with a lot of excess meat supply in North America.

“It makes Canada have to go to our other export customers such as Japan and South Korea, and try to do business with them,” Dan Norcini, an Idaho-based independent livestock futures trader, said in an email. “Also, it adds to the total of North American pork production at a time when we sure as heck do not need any more pork around here.”

The Asian nation’s investigation into traces of a banned feed additive led to the discovery of counterfeit health certificates attached to a pork shipment. Marie-Claude Bibeau, Canada’s minister of agriculture and agri-food, confirmed that “inauthentic export certificates” were used. The import suspension applies to all Canadian meat.

“We produce a lot more than we can eat in Canada, so obviously any time a market gets closed, it’s going to have an impact on us,” said Ryan Thompson, a beef farmer at Living Sky Beef near Minton, Saskatchewan.