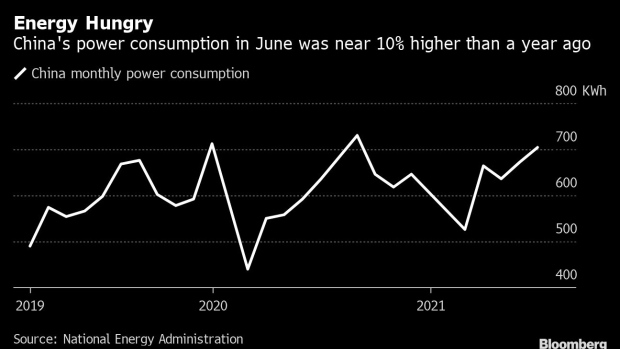 The power load in the eastern province of Zhejiang near Shanghai surpassed 100 million kilowatts per hour on Tuesday for the first time, the State Grid said in its newspaper. Usage has also hit records in nearby Jiangsu and the southern region of Guangdong, where temperatures have reached as high as 37 degrees Celsius (99 degrees Fahrenheit).

Pressure on the nation’s electricity sources is resurfacing with the onset of summer, which meteorologists have said may be hotter than usual this year. Compounding the problem is China’s strong economic growth as factories return to full strength after the pandemic. Power consumption surged 10% in June.

The excessive demand boosted Chinese thermal coal futures to the highest in two months this week, capping a 30% rally this year amid a supply shortage. Futures retreated as much as 3.8% on Thursday after China announced a plan to release a quarter of its coal reserves.

Coal, China’s principal energy source, has been in short supply as a trade spat with producer Australia has crimped imports, while a spate of fatal accidents has led to safety inspections. At the same time, China’s efforts to limit the use of the dirtiest fossil fuel have been thwarted as hot weather raises air conditioning needs.

“Southern China has been very hot, and the daily power load is consistently breaking new highs,” said Huatai Futures Co. analyst Wang Haitao. “Although the supply of coal has increased, that’s hard to sustain given the intense draw-down. Some regions are again rationing electricity and issuing warnings about using coal.”

Authorities have tried several measures to ease the situation. Among the biggest was the plan Thursday to supply 10 million tons of the fossil fuel from reserves, the fifth release of stockpiles this year, according to the Xinhua New Agency. China is also considering price caps. But any efforts to boost production at local mines will take time, and the spot market remains especially tight.

Zhejiang’s peak load is equivalent to almost five times the energy produced by China’s largest hydropower station, the Three Gorges. The province is still highly reliant on coal, with only 30% of its power supplied from renewable sources. Jiangsu’s energy needs are even higher, with the province expected to have a peak load of 125 million kilowatt per hour this summer.

Extreme weather is upsetting the coal market in more ways than just hot temperatures. A rainstorm days ago temporarily halted the road links between major coal sourcing province Shanxi to some neighboring regions. That forced Henan province to ban exporting its own coal production to other areas, the official Securities Times reported.

Henan also ordered coal producers to report their production and inventories to the government on a daily basis to keep track of supplies and demand, the newspaper said. The government’s concern followed a record power load in Zhengzhou, its capital city, according to the report.

Other commodities also risk being hit by efforts to keep electricity flowing. Aluminum output is likely to come under further pressure as supply curtailments due to electricity shortages persist. Smelters in the major hub of Yunnan won’t restore production as planned after a new round of power rationing due to the hot weather, according to Mysteel.