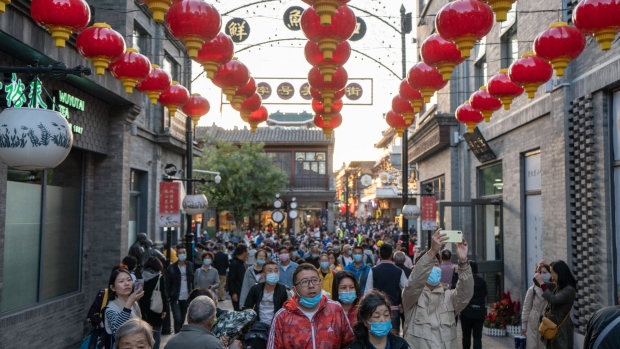 Visitors walk in Qianmen area in Beijing, China on Sunday, Oct. 4, 2020. A significant rebound in domestic travel over the Golden Week holiday is fueling optimism that consumers are starting to spend again after the pandemic-induced slump. , Bloomberg

Travel in China rebounded over the eight-day holiday period this month as the nation displayed further evidence that it is overcoming the coronavirus pandemic, with about 637 million trips made, government data show.

While that was down from the 782 million trips made during the same period in 2019, it is much better than during the 5-day holiday period in May, according to Macquarie Group Ltd economists. The full total for the Autumn Festival period was 81% of 2019’s level, data from the Ministry of Culture and Tourism released late Thursday show.

The containment of the virus provided the basic public health conditions for holiday activities, which showed an “obvious revival,” according to a report from Citigroup Inc. “Household purchasing power recovered steadily, and consumer confidence also came back on overall economic recovery,” they wrote.

Domestic tourism income during the holiday was about 467 billion yuan ($70 billion), according to the ministry. That is down 28% from the seven-day holiday a year earlier, according to Bloomberg calculations, when income was 650 billion yuan.

There was a strong recovery in consumer spending during the holiday period, according to economists at Macquarie led by Chief China Economist Larry Hu. This suggests that “service consumption, largely driven by the pent-up demand, could rebound quickly once things are returning to normal.”

One factor boosting domestic tourism is the effective collapse of international movement due to travel bans and stringent quarantine requirements on returning to China. Mainland visitors to Hong Kong were down 99%, and dropped 85% to Macau during the holiday period, Macquarie said.

However, schools in Beijing and other places were discouraging their students from traveling during the period, which may have undercut demand.