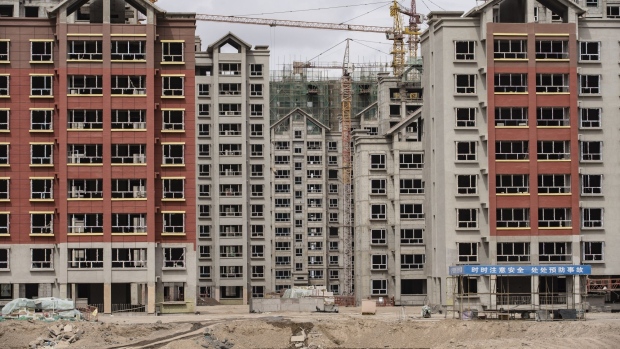 Residential buildings under construction in the new city area of Yumen, Gansu province, China, on Wednesday, March 31, 2021. Yumen, "the cradle of China's oil industry," has become a totem for China's changes over the past four decades—from a time of sacrifice and ideology to one of entrepreneurs and the pursuit of wealth, from the old economy to the new, from fossil fuels to renewable energy. Photographer: Qilai Shen/Bloomberg , Bloomberg

(Bloomberg) -- China’s home prices grew at the fastest pace in nine months in May as buyers competed for dwindling properties, even as authorities introduced more targeted curbs on the market.

Buyer enthusiasm has persisted despite stricter measures imposed in some large cities this year, as available housing stock continued to fall. As a traditional busy season for sales wrapped up, supply halved on average in the four biggest cities and plummeted more than 30% in lower-tier areas last month, according to China Real Estate Information Corp.

Housing inventory shrank in more than 70% of cities, worsening an undersupply. Last month, policy makers signaled they may revive efforts to trial a long-delayed national real estate tax, a stronger signal of their willingness to rein in prices. The banking regulator also began to curb issuance of securities backed by residential mortgages, a move that may curtail new home loans and slow buyer demand.