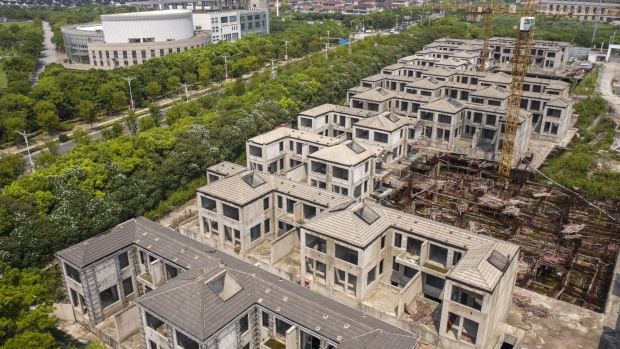 Combined contract sales plunged 39.7% from a year earlier to 523.1 billion yuan ($78 billion), according to data compiled by China Real Estate Information Corp., as demand remained stagnant amid an economic downturn despite government efforts to stimulate purchases.

The pace of decline was narrower than the previous month’s 43% fall, CRIC said in a report. However, combined sales plummeted 49% in the first seven months, a relatively steep drop compared with the magnitude of declines in the same period of previous years, the report said, without elaboration.

The preliminary July sales figures provide the first reading on property purchases since homebuyers nationwide began refusing to pay mortgages on stalled projects. A revival of home sales is needed to generate cash for debt-laden developers like China Evergrande Group and reduce mounting pressure on banks and the economy.

“Overall market demand and purchasing power have been overdrawn, while the industry confidence is also at a low level,” CRIC said in the report. “Developers are still facing heavy de-stocking pressure in the short term.”

The Chinese government has been racing to rescue its all-important real estate sector as a long-standing crackdown on leverage and speculation hits demand. Authorities have cut borrowing costs and downpayments among other measures to shore up a sector that accounts for about a quarter of the world’s second-largest economy.

China’s overall property loans rose at the slowest rate on record as of the end of June, as banks were cautious about lending to cash-strapped developers while household demand for mortgages was weak. Housing prices fell for a 10th straight month in June.

Cities under heavy pressure from the property slump will likely implement fiscal measures to stimulate home buying and stabilize market expectations, the report said, adding that ensuring delivery of housing projects would be an important task for builders as stressed at the latest Politburo meeting.