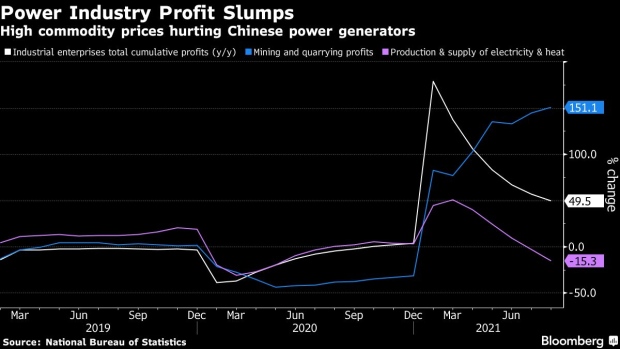 (Bloomberg) -- Profit growth at China’s industrial firms continued to slow in August as high commodity prices pushed up costs while constraints including virus outbreaks and a chip shortage curbed production.

Industrial profit growth decelerated to 10.1% in August from a year earlier, the slowest pace since last September, the National Bureau of Statistics said Tuesday, compared with a 16.4% increase in the previous month. For the first eight months of the year, profits climbed 49.5% from a year earlier.

Industrial profits grew steadily and business conditions continue to improve in August despite the sporadic virus outbreaks, floods, and a high base for comparison during the same period last year, according to Zhu Hong, an economist with the statistics bureau.

However, “the sustained and stable recovery of corporate profits is facing many challenges, as problems including regional outbreaks, the high prices of commodities, the high cost of international logistics, and the shortage of chips are still pushing up corporate costs,” she said.

Profits at mining and raw material manufacturing industries grew at a significantly higher pace than the average pace of industrial firms in August, Zhu said. The coal industry reported a 241% profit growth rate, driven by high commodity prices, she said, while those at oil and gas mining were up 257% from a year ago.

A further slowdown in industrial profit growth suggests the People’s Bank of China may take further steps to loosen monetary conditions to support the economy, with an additional cut of 50 basis points in the required reserve ratio expected in the next month or two.

China’s industrial output growth slowed to 5.3% in August from a year earlier, but factory-gate inflation accelerated to a 13-year high of 9.5% last month. The latest power crunch across China will likely further push up industrial prices in the short term, adding to the operating costs of companies.

The profits of the electricity and heat production and supply industry fell 15.3% in Jan.-Aug., the data showed, the worst result of any sector.

China’s State Council last week pledged to use more market-based measures to stabilize commodity prices and ensure supplies of power and natural gas during the winter.

(Updates with details, a new chart and Bloomberg Economics comment.)