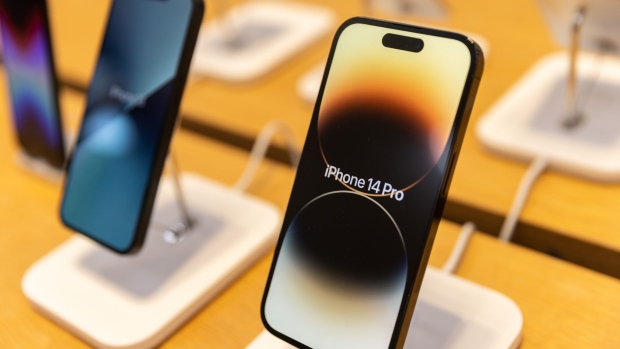 The Apple iPhone 14 Pro on sale at the company's Fifth Avenue store in New York, US, on Friday, Sept. 16, 2022. Photographer: Jeenah Moon/Bloomberg , Bloomberg

(Bloomberg) -- Zhengzhou, home to Apple Inc.’s largest iPhone manufacturing site, will be largely locked down for five days as officials in the Chinese city resort to tighter curbs to quell a swelling Covid-19 outbreak.

Mobility controls -- a euphemism for lockdown -- will be imposed in the main urban areas of Zhengzhou from Friday through Nov. 29 because of rising virus cases, Zhengzhou’s pandemic task force said in a statement late Wednesday. The city reported 996 infections on Wednesday, up from 813 a day earlier.

The new restrictions were announced after hundreds of workers at the plant, known as ‘iPhone City’ for its scale, streamed out of dormitories earlier in the day. Employees at the Foxconn Technology Group factory clashed with white-clad security personnel, according to videos from the scene, with anger over unpaid wages and fear over virus infections fueling the unrest.

According to the Zhengzhou government’s Wednesday night directive, people living in areas designated as high risk must stay at home, while others are advised not to leave their residences or compounds unless necessary. Daily PCR tests will also be conducted.

Ronnie Cai, 31, lives in one of the locked down districts. He said there were rumors more intensive restrictions were coming before the announcement.

“I just don’t understand how, after fighting the virus for a month already, we can really get it under control in five days,” Cai said. “I have food that I stockpiled earlier and community officials said we can go out to buy food at a specific time, but we haven’t been given guidance on how it will work yet.”

The district where Foxconn’s factories are located wasn’t included in the eight districts to be placed under lockdown, according to the government’s statement.

Still, the plant is in an area already classed as high risk, which means lockdown-like movement restrictions remain in place. The company has been operating a so-called closed loop at the site for some time, where workers are effectively confined to their dorms and the production line, with no contact with the outside. The systems allow factories to maintain production amid Covid lockdowns, but the requirement to seal workers off has led to unrest both in Zhengzhou and elsewhere.

Zhengzhou’s moves mark a step back toward the sweeping, intensive Covid curbs China was using before top leaders urged a more targeted approach.

In the week or so since China’s National Health Commission issued a new 20-point playbook for handling Covid with fewer disruptions, surging infections have seen a raft of cities forced to revert to the tougher approach of old. Shijiazhuang, a city close to Beijing that eased a raft of testing in the wake of the new directives, had to backtrack within a few days, effectively locking down the city.

Covid Zero Returns to Chinese City Rumored to Be Reopening

Traffic controls aimed at keeping non-essential vehicles off the roads will also be in place in Zhengzhou. The city will wage an “elimination battle” against Covid over the next five days, with no household or person missed in a mass testing exercise, the state-run Zhengzhou Daily said.

It’s a marked shift for a city that was criticized in the past by China’s National Bureau of Disease Control and Prevention for using blanket shutdowns instead of more precise curbs.

Zhengzhou’s moves show the difficulty of applying a lighter, more targeted approach to Covid when the aim is still to suppress outbreaks. More contagious variants of the virus have made China’s Covid Zero policy, which was deployed successfully during the initial outbreak in Wuhan, virtually untenable without sweeping restrictions.

“Excess restrictions are hard to resist as long as containing the outbreak remains the central task of Covid Zero,” said Neo Wang, Evercore ISI managing director for China Research, adding that the new measures seem justified. “That means the government will continue prioritizing the protection of the industrial sector and supply chains.”

--With assistance from Henry Ren and Mengchen Lu.

(Updates with comments from locked-down resident from fifth paragraph.)