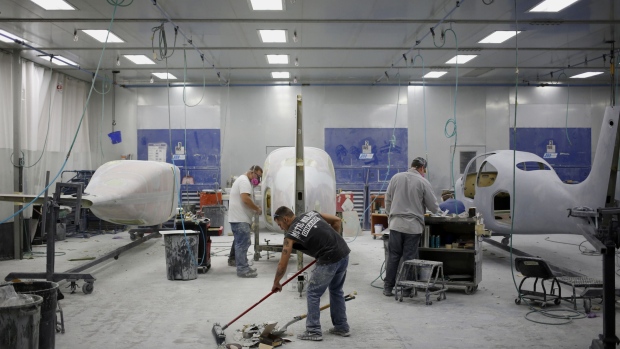 Workers at a fCirrus Aircraft, one of AVIC's companies in the U.S., at a facility in Duluth, Minnesota. Photographer: Luke Sharrett/Bloomberg , Bloomberg

(Bloomberg) -- China put on a spectacular military parade to celebrate the 70th anniversary of Communist Party rule last year, and President Xi Jinping wasn’t the only star of that show.

As Xi and other leaders watched from a Tiananmen Square grandstand, a squadron of fighter jets, attack helicopters, troop transports and surveillance planes roared overhead in a display orchestrated to impress TV viewers at home and warn potential aggressors abroad. The company that made those aircraft: Aviation Industry Corp. of China (AVIC), a state-owned conglomerate with 100-plus subsidiaries and 450,000-plus employees — more than Boeing Co. and Airbus SE combined.

Being China’s premier military aerospace contractor and a pillar of Xi’s strategy to become an industrial superpower are enough by themselves to warrant attention from the U.S. government. But AVIC builds more than war machines, running a civilian business that makes airliners and private jets — some built with parts made by joint ventures with American companies.

“AVIC is aspiring to be China’s Boeing and Airbus,” said Zhanfu Yu, a partner with consultancy Roland Berger in Beijing focusing on aerospace and defense. “Aerospace is a capital-intensive industry and, therefore, fits with China’s state system. AVIC has benefited from such state backing.”

With relations between Washington and Beijing deteriorating, and companies increasingly being caught in the crossfire, AVIC could join Huawei Technologies Co., ByteDance Ltd.’s TikTok and Tencent Holdings Ltd.’s WeChat as a target for U.S. politicians wanting to crack down on China’s reach. President Donald Trump’s administration in June already put AVIC on a list of firms it says are controlled or owned by China’s People’s Liberation Army.

AVIC hasn’t addressed those allegations publicly and didn’t respond to requests for comment for this story. The government says it owns AVIC.

The Beijing-based conglomerate is one of the biggest military contractors in the world, with revenue of 461.8 billion yuan ($68.5 billion) last year, according to data compiled by Bloomberg. That’s more than Lockheed Martin Corp., General Dynamics Corp. or Northrop Grumman Corp.

But unlike many other companies on the Pentagon list, such as China Shipbuilding Industry Corp. and China Mobile Communications Group, AVIC has a footprint in the U.S. reaching from the Gulf of Mexico to the Great Lakes.

AVIC has joint ventures with some of the top U.S. names in aerospace. A partnership with General Electric Co. makes avionics solutions such as flight recording systems; another with Honeywell International Inc. makes flight-control hardware and software; and a venture with Textron Inc. makes Cessna business jets.

These partnerships potentially make AVIC vulnerable to U.S. attention because they create national-security concerns, said Oriana Skylar Mastro, a center fellow at Stanford University’s Freeman Spogli Institute for International Studies. Xi has said China’s civilian companies must cooperate with the military to strengthen its ability to innovate in science and technology.

“AVIC probably has a role in a lot of those other realms,” she said. “We need to keep an eye on it.”

AVIC and its many partnerships with multinationals also present challenges for China hawks in the U.S. who favor “ decoupling,” she said, referring to forcing companies to sever ties with counterparts in China.

“This highlights the challenges of decoupling,” Mastro said, “because in China you don’t have clear breaks between many public and private companies, and between civilian and military ones.”

Many big European aerospace companies work with AVIC, too.

Airbus owns 5% of one AVIC subsidiary and also has a joint venture to make composite material parts and components for jets such as the A320. The Chinese company works with Paris-based Safran SA, as well, to make turbine blades and casings for aircraft engines, and other parts.

Trump’s administration, in addition to accusing AVIC of being an arm of China’s PLA, also unveiled more restrictive guidelines regarding business partnerships that might benefit the Chinese military. The president said Sept. 7 he wants to forbid companies outsourcing to China from winning federal contracts, but he’s yet to detail what that may involve.

“I don’t want them building a military like they’re building right now and they’re using our money to build it,” Trump said last month.

AVIC is one of almost 100 companies reporting to the State-owned Assets Supervision and Administration Commission of China’s State Council, according to the commission’s website. The body, known as SASAC, represents Beijing’s voice in company boardrooms.

One of AVIC’s American subsidiaries is engine-parts maker Continental Aerospace Technologies, headquartered in Mobile, Alabama. Continental, founded in 1905 and acquired by AVIC in 2011, received at least $5 million in coronavirus relief funds from the U.S. Treasury this year.

Another subsidiary, Nexteer Automotive Group Ltd., a Michigan-based producer of steering systems, received more than $60 million in research-and-development assistance from the U.S. government in 2018 and 2019, according to company filings. That’s in addition to state aid.

Those are relatively small sums for a behemoth like AVIC. More importantly, its acquisitions of small and midsize enterprises provide access to manufacturing expertise and other skills with civilian and military applications, said Michael Raska, an assistant professor at Nanyang Technological University’s S. Rajaratnam School of International Studies in Singapore.

“You have innovation aspects that can be transferred into military development,” Raska said. “It’s not only about the technology — it’s about ensuring the quality, reliability and performance of the production.”

Since 2008, AVIC has spent at least $3.3 billion acquiring at least 20 aerospace, automotive and engineering companies, primarily in the U.S. and Europe, the U.S.-China Economic and Security Review Commission said last year.

“If you sell paper cups to AVIC, then you are part of the Chinese military establishment if they interpret it broadly,” said Scott Kennedy, a China scholar at the Center for Strategic & International Studies, a bipartisan research center in Washington with prominent Republicans and Democrats on its board.

Continental Aerospace and Nexteer didn’t respond to requests for comment.

GE and Airbus said in separate statements their partnerships with the Chinese conglomerate follow relevant laws and regulations.

“Our JV with AVIC was carefully negotiated to ensure compliance and data security for its commercial-only technology,” Boston-based GE said.

China kept quiet in June after the Pentagon released its initial list of Chinese companies with suspected military links, but the country’s foreign ministry criticized the U.S. on Sept. 1 after the U.S. accused 11 more state-backed entities of being PLA surrogates.

“The U.S. has time and again stretched the concept of national security and abused national power to suppress certain Chinese companies, which is in serious violation of market principles and international trade rules,” said Hua Chunying, a Chinese foreign ministry spokeswoman.

AVIC’s roots date to an aviation bureau the Communist government started in 1951, when Chinese soldiers were fighting Americans in the Korean War.

But AVIC churned out inferior products for decades and, as recently as the early 2000s, the Chinese military largely relied on imports from Russia, said Tai Ming Cheung, a professor at the University of California San Diego’s School of Global Policy and Strategy, and author of several books about China’s military.

After taking its current corporate form in 2008 with the merger of two state companies, AVIC put more money into research-and-development and eventually produced some key weaponry in China’s air force, including the J-20 stealth fighter, the Y-20 large transport and the Z-19E attack helicopter.

“The J-20 has the potential to provide China with a variety of previously unavailable air combat options and enhance its capability to project power,” CSIS, the Washington-based think tank, said in a report.

Works in progress, according to Chinese state media, include a stealth fighter and a seaplane that would be the world’s largest amphibious aircraft.

“There is still a gap between where AVIC is and where the U.S. is, but AVIC has been able to slowly narrow that gap,” Cheung said.

As an integral part of Xi’s “Made in China 2025” program to reduce reliance on critical technology imports, AVIC is a shareholder in the Commercial Aircraft Corp. of China, or Comac, which is building alternatives to Boeing and Airbus planes for Chinese carriers.

Under Xi, the government is increasing defense spending and promoting greater integration between companies and the PLA. China formed the Central Commission for Integrated Military and Civilian Development in 2017, and Xi oversees it.

The integration push comes as military tensions rise everywhere from China’s border with India to the Taiwan Strait, with the government sending AVIC-made planes to fly over disputed areas and warn potential adversaries not to underestimate the People’s Liberation Army.

China’s official budget showed the equivalent of about $189 billion in defense spending this year, compared with about $177 billion in 2019. Outside analysts agree that the country spends more than the official figures reveal, though, with the Stockholm International Peace Research Institute putting the total for 2019 at $261 billion.

As the U.S. presidential election approaches, a crackdown on Chinese influence is one of the few foreign policies that politicians from both parties can support. The Democratic Party platform behind presidential candidate Joe Biden contains repeated promises to stand up to China, and House Speaker Nancy Pelosi is a longtime critic of Beijing.

“The rules have changed,” said Malcolm Davis, a senior analyst at the Australian Strategic Policy Institute in Canberra. “Commercial companies are all going to think long and hard of the national-security consequences of engaging with a Chinese company.”