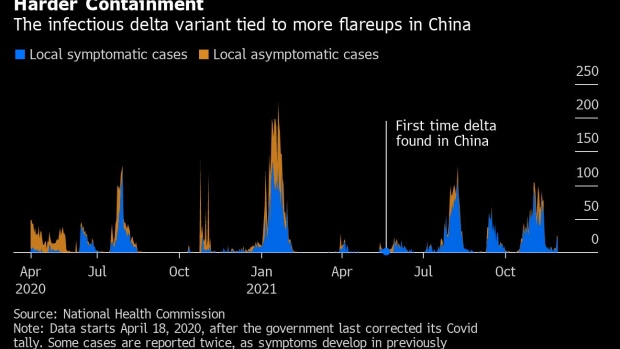 (Bloomberg) -- China reported 91 new local infections of Covid-19 in Inner Mongolia on Wednesday, as an outbreak in a border town continued to pick up steam.

While most of the world is now focused on the potential damage from the novel omicron variant that was identified last week in southern Africa, China remains dedicated to the increasingly difficult task of containing the virus and restoring its Covid Zero status. It has been more than six weeks since there were no local daily infections reported.

All of the newly transmitted infections were found in the city of Hulunbir, the National Health Commission said in a statement on Wednesday. Two additional people without symptoms also tested positive. All are in quarantine while contact tracing and mass testing are underway to search for additional infections.

The latest flareup originated from overseas and is unrelated to previous outbreaks in China, a health official said at a press conference on Tuesday. It is concentrated in Hulunbir, which borders Russia to the north and Mongolia to the west.

The ongoing spread of Covid, even from unrelated outbreaks, poses a challenge to the world’s most populous country. While its closed borders and strict curbs offer some protection from the new omicron variant, the difficulty in returning to zero new cases shows just how hard it has been for China to eradicate the more infectious delta variant now that it has taken hold within the country and is transmitting widely among its neighbors.

It’s also testing whether China’s Covid Zero approach - embracing the strictest travel curbs and implementing lockdowns after even single-digits flareups - will be practical and sustainable.

“My belief is that it’s going to be impossible to achieve Covid Zero,” said S.V. Mahadevan, director of South Asia Outreach at the Center for Asian Health Research and Education at Stanford University Medical Center. “Someone who’s infected will slip through, and as Covid evolves, future generations may be more infectious and spread even more quickly.”

The number of new daily cases reported Wednesday is close to the peak level from the last wave. China is facing increased pressure from imported infections, even as the omicron variant starts to spread elsewhere, said Mi Feng, a spokesperson of the National Health Commission.

“New local cases have mostly been found in border and port towns since November, so China will firmly stick to the strategy of preventing imported cases from abroad and resurgence at home to minimize the impact of the virus on the economic society,” Mi said.