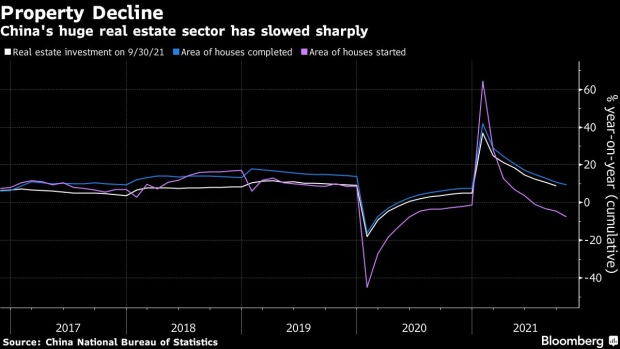 (Bloomberg) -- More Chinese developers are at risk of defaulting due to a liquidity crunch despite recent measures by the authorities to free up some funds, according to S&P Global Ratings.

The cut in the reserve requirement ratio won’t be enough to save some property developers with ratings of single B and below from default, Esther Liu, a director at S&P, said in a briefing on Tuesday. These borrowers were already exposed to funding pains as investors turned more selective amid the risks of contagion from the China Evergrande Group situation, she said.

“We expect more debt restructurings, more exchange offers that we might identify as distressed exchanges because they are less than the original promise,” Liu said during an online webinar.

The People’s Bank of China said on Monday it will reduce most banks’ reserve requirement ratios by 0.5 percentage point next week, releasing 1.2 trillion yuan ($188 billion) of liquidity. That came as the Chinese government seeks to extend support to the economy, whose growth is threatened by a slide in the property market.

S&P expects the downturn to persist on the back of credit tightening and restrictive policies in the sector, potentially leading to a 10% decline in nationwide residential sales next year and an additional 5%-10% drop in 2023. In the worst-case scenario it expects a third of its rated Chinese developers to continue having liquidity problems over the next six to 12 months.