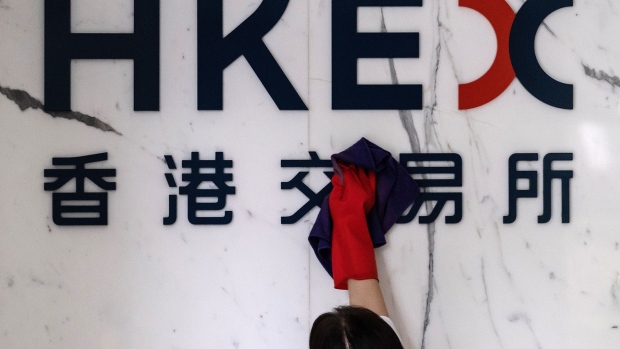 A worker cleans signage for Hong Kong Exchanges & Clearing Ltd. (HKEX) displayed at the Exchange Square complex in Hong Kong, China, on Wednesday, Aug. 19, 2020. HKEX posted a 1% gain in profit, benefiting from a spate of high-profile Chinese stock listings and a pick up in trading as the pandemic and political tensions stoked volatility. Photographer: Roy Liu/Bloomberg , Photographer: Roy Liu/Bloomberg

(Bloomberg) -- Chinese startup Xiaohongshu, or “Little Red Book,” is weighing a Hong Kong initial public offering to raise at least $500 million, after putting its U.S. listing plans on hold, according to people familiar with the matter.

The company, which calls itself a lifestyle content platform, is working with advisers and could file an application for a Hong Kong IPO as soon as this year, the people said, asking not to be identified as the information isn’t public. A listing could even raise as much as $1 billion depending on the market, the people said.

Deliberations are still ongoing and details such as fundraising size and timing could change, the people added. A representative for Xiaohongshu said the company maintains regular communication with stakeholders, but that they do not have any specific IPO plans at the moment.

Backed by Tencent Holdings Ltd. and Alibaba Group Holding Ltd., Xiaohongshu is one of several companies that have been forced to revisit their U.S. listing plans after China proposed new rules for firms going public overseas. Among them is a requirement for all companies holding data on more than 1 million users to submit to a cybersecurity review, one of the reasons Xiaohongshu paused its U.S. float, Bloomberg News reported in July.

Xiaohongshu was seeking a valuation of about $6 billion in a funding round last year, Bloomberg News has reported.

Other firms that are considering moving their U.S. IPOs to the Asian financial hub include on-demand logistics and delivery firm Lalamove and artificial intelligence-chip startup Horizon Robotics Inc., Bloomberg News has reported.

Chinese audio startup Ximalaya Inc. is the first company since Didi to have formally moved its IPO from the U.S. to Hong Kong, as it submitted listing documents last month.

Xiaohongshu, which stresses its name has no relation to the book of Mao Zedong’s quotations, was founded in 2013 as an online community that recommends overseas e-commerce sites for users in China. It later entered e-commerce and evolved into a social media platform where users share their daily life moments through videos and pictures on topics ranging from skincare to food and travel.

The platform had more than 1,000 employees as of last year, and its monthly active users surpassed 100 million as of July 2020, according to its website.