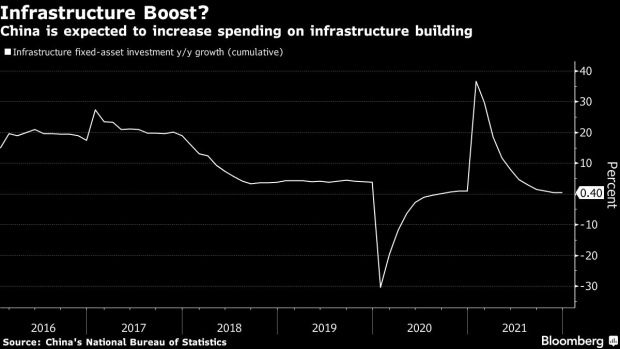 Shoppers and visitors walk along Nanjing Road East in Shanghai, China, on Sunday, Oct. 3, 2021. China contained its latest Covid-19 outbreak just in time for a week-long holiday that started on Oct. 1, avoiding the need for travel curbs during a crucial period of consumer spending and domestic tourism. Photographer: Qilai Shen/Bloomberg , Bloomberg

(Bloomberg) -- China’s local governments have been selling bonds at a modest pace in January, undermining market expectations of a strong fiscal boost early in the year to cushion a slowing economy.

Local authorities are scheduled to issue 516.8 billion yuan ($81.8 billion) of new general and special bonds by the end of January, which accounts for 12% of estimated annual quota for 2022, according to Bloomberg data. The bonds are mainly used for infrastructure spending, a key way for policy makers to deliver stimulus to the economy.

The increase in bond sales is slightly faster than the 9% growth at the same time in 2019, but slower than the 17% pace in 2020, the figures show. In both those years, regional governments were allowed to sell new bonds before the quota was approved by lawmakers in March, as they are this year. Progress was much slower at the beginning of last year, however, because Beijing didn’t grant approval for the advanced bond sales.

“The progress of bond issuance is slightly slower than expected, and the market may need to adjust their expectations of the impact of fiscal policy and infrastructure investment on the economy,” said Qi Sheng, chief fixed-income analyst at Founder Securities Co.

The absence of a blockbuster beginning to the year’s bond sales means local governments will have limited firepower to boost spending, even though officials have called for more active fiscal policy and front-loaded stimulus to stabilize a faltering economy. It also contrasts with the central bank’s proactive action in recent weeks, including the first policy rate cut in almost two years.

Investors have been betting on a likely boost to construction to help lift the economy, with the CSI 300 Infrastructure Index climbing 13% from a trough at the end of November. The market expected the bond issuance progress to be on par with the level in 2020 at 15% to 20% of the full-year quota by January, according to Qi.

The ratio is calculated with the assumption that China will set the quota for local government special bonds at 3.65 trillion yuan this year, as Bloomberg News reported previously, and that the general bond quota will be set at a similar level to last year, according to estimates by Qi. That puts the total bond quota at an estimated 4.47 trillion yuan.

Local governments were slow to sell bonds early last year because no advanced quota was issued, but they accelerated the sales toward the end of 2021 as Beijing requested.

The Ministry of Finance allowed sales of 1.46 trillion yuan of debt from December in an attempt to increase public spending as quickly as possible. That’s after government spending rose at the slowest pace in nearly two decades last year.

Yang Yewei, an analyst at Guosen Securities Co., expects infrastructure investment growth will likely reach 4% to 6% in the first quarter. That would match the pace in 2019 before the pandemic, but slower than the years before. Local governments’ limited financial resources and reluctance to launch new projects have slowed the issuance of new special bonds, Yang said.

A lack of qualified projects under resurgent pandemic outbreaks is a major reason behind the slow issuance, Founder’s Qi said. The limited local bond supply has led to banks increasing their allocation of sovereign bonds, he said, which has helped push China’s 10-year government bond yields down about 6 basis points since the beginning of the year.