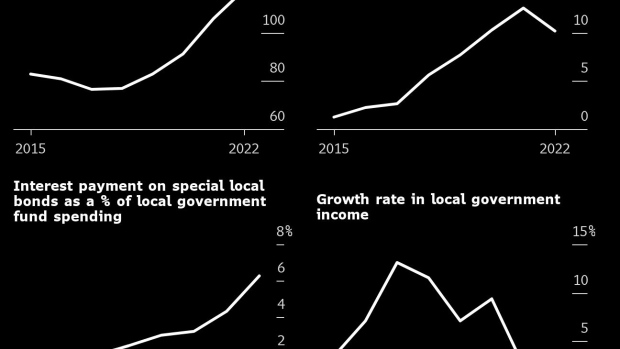 China’s 31 provincial governments have a stockpile of outstanding bonds that’s close to the Ministry of Finance’s risk threshold of 120% of income. Breaching that line could mean regions will face more regulatory hurdles to borrow, hampering their ability to drive up economic growth.

In addition, local authorities will face a massive maturity wall over the next five years as bonds worth almost 15 trillion yuan ($2.1 trillion) -- more than 40% of their outstanding debt -- fall due.

While there’s little risk of provincial governments defaulting, they will run into increasing difficulty in repaying their debts. More and more bonds will need to be sold to roll over maturing ones rather than to finance new spending and as a result, investment growth may suffer.

A major cause of the financial squeeze is the property crisis. Revenue from land sales -- which in the past made up about 30% of local governments’ income -- has plummeted. On top of that, trillions of yuan in tax breaks were doled out to businesses to help them cope with the economy’s slowdown over the past few years.

The central government recently acknowledged for the first time concerns about special local bond repayment risks, urging Shenzhen, the technology hub that neighbors Hong Kong, to consider setting up a provision fund to prevent debt payment risks. Shenzhen’s finances are in better shape than many other cities or provinces, and it’s a sort of test area for fiscal reforms.

At an October meeting of the standing committee of the National People’s Congress, the country’s parliament, some delegates warned it would be “difficult to repay as scheduled” local government debt maturing in the next couple of years. They called for contingency plans to be made early.

Economists like Ding Shuang at Standard Chartered Plc say the national government should take on more of the debt burden by borrowing more. Yu Yongding, a former central bank adviser, and other economists made a similar call in a report earlier this month, saying the central government should sell more debt, particularly of general bonds which could be used to invest in infrastructure.

“It should be the central government, rather than provinces, to add leverage -- regional finances have turned quite weak over the past few years,” Ding said. “The government will come under more and more pressure to make the change. It is a matter of time.”

China set the risk threshold for provincial debt at 120% of their “comprehensive financial resources” -- widely regarded as the combined income from the general public budget and the government fund budget, as well as transfer payments from the central government.

Before 2020, the ratio was fairly stable, with Beijing’s push to curb debt helping to bring it down slightly. The ratio has surged since then as the government ramped up fiscal stimulus during the pandemic. Provincial debt jumped to 118% of income by the end of September from 83% in 2019, according to Bloomberg calculations based on official data.

Local governments’ revenue, by contrast, has weakened substantially, largely due to the property slump and the plunge in land sales. The annual increase in overall local income weakened to just 2.5% last year, compared with 7.1% in 2019 and double-digit growth in the two years prior to that.

“The stubbornly faster growth of explicit government borrowing than the authorities’ financial resources means their debt pressure will continue to rise,” Yewei Yang, chief bond analyst at Guosheng Securities Co. wrote in a November note. “That will pose new challenges to the room for fiscal policy in future and fiscal health and stability.”

The northern port city of Tianjin has the highest debt-to-income ratio among all provincial-level authorities, partly because it gets the least transfer payments from the central government, Yang estimated. The burdens faced by Jilin and Liaoning in the northeast, along with Chongqing, Guizhou and Yunnan in the southwest, are also among the heaviest in the country, he said.

Tianjin’s outstanding debt was about 207% of its overall income last year, almost double the national level of 106%, Bloomberg calculations based on government figures show.

To bring overall borrowing below the threshold, high-risk regions will be required to curb the size of their investment projects, cut public spending, and dispose of assets, according to a report by the Ministry of Finance. Some provinces, such as Anhui in central China, have already moved to ban risky areas from adding new debt.

The fastest growing portion of provinces’ debt pool is special bonds. These are funds mainly raised to finance infrastructure investment, which helps to drive economic growth. Nearly 11 trillion yuan of new special bonds have been issued since 2020, more than double what was sold in the five years from 2015, when local governments were first allowed to issue the notes on their own.

Next year will be particularly challenging for local governments’ finances. Some 3.65 trillion yuan of bonds are maturing in 2023, a record high for any single year and an amount as large as this year’s new special bond quota.

Even interest payouts are a growing problem. Interest payments on special bonds reached 479 billion yuan in the first nine months of the year, equivalent to 6.2% of spending under the government fund budget. A level above 10% will trigger fiscal restructuring -- as happened to Hegang city late last year -- forcing local governments to tighten their purse strings, including by freezing hiring, according to rules published in 2016.

If the central government issues more general bonds to fund infrastructure projects, it would have to let the official fiscal deficit balloon from its current levels of about 3% of gross domestic product. The official deficit has been kept low because the government is cautious about expanding general bond sales, preferring to allow provinces to issue more and more special notes.

Standard Chartered’s Ding estimates the broad fiscal deficit will reach 7.3% of GDP this year if special local bonds are included.

“Such a high ratio is unsustainable,” he said.

--With assistance from Helen Sun.

(Adds details about regions most troubled in the 14th and 15th paragraphs.)