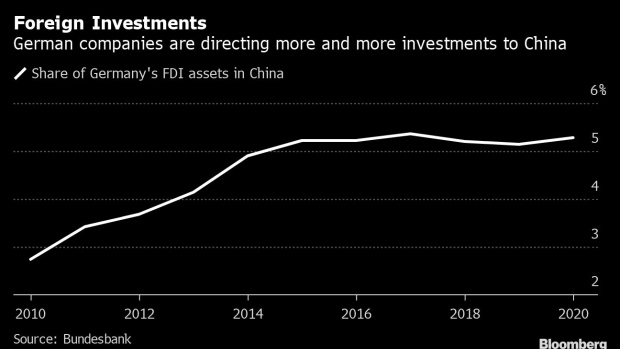 European investment in China is holding up for now despite deteriorating political relations between the two trading partners, with businesses looking for ways to work around any decoupling threat.

Investment from the European Union into China was up 15% in the first half of 2022 compared to a year ago, according to data from Rhodium Group, helped by BMW AG’s purchase of a controlling stake in its car-making joint-venture in the first quarter.

Although investment has shown some weakness more recently, European firms aren’t pulling out of China as some had feared. In fact, rising geopolitical tensions may even be encouraging businesses to expand local production chains, analysts say.

“We’re not seeing any large exodus yet and companies are still working on completing already planned projects,” said Mark Witzke, a research analyst at Rhodium Group. “At least for European companies, it’s mostly the larger players that already have significant interests in China continuing their planned investments, albeit with some delays” due to lockdowns to curb Covid infections.

Relations between Europe and China have been deteriorating for more than a year, with Beijing’s refusal to condemn Russia’s invasion of Ukraine only worsening political ties. A bilateral investment treaty with Brussels was frozen last year, adding another layer of risk. On top of that, punishing lockdowns across China this year pushed the economy into contraction and hit business profits.

Despite that, exports from Europe have held up, with the total value of shipments in the first six months of 2022 basically unchanged from last year despite harsh Covid lockdowns in some Chinese cities significantly crimping demand in the second quarter.

The Chinese market was a savior for many foreign firms’ balance sheets in recent years, with the government bringing Covid infections under control and quickly reopening the economy in 2020 and growth reaching 8.1% last year, compensating for recessions and lockdowns in other markets. That situation has reversed in 2022, with lockdowns in Shanghai and elsewhere shuttering factories and hitting profits so far this year.

The economy looks to be weakening again, with the central bank surprising with an interest rate cut this week as retail sales, investment, and industrial output all slowed. With the housing market still in turmoil and Covid cases rising to a three-month high, economists are cutting their forecasts for growth and there are signals of more stimulus to come in an effort to rescue flagging demand.

Even so, many foreign firms still believe there’s more to gain than lose from being in China.

BMW AG opened a multi-billion-dollar factory extension in Shenyang earlier this year, Audi is building its first electric vehicle plant in the country, and Airbus SE is cementing its position in the Chinese market thanks to a local final assembly line that helped it score an order worth more than $37 billion last month.

“If your definition of decoupling is foreign companies either leaving China outright, or at least significantly decreasing their footprints and diversifying investments out of China, then that certainly is not happening,” said Jacob Gunter, a senior analyst at the Mercator Institute for China Studies in Berlin. “What we generally see across most industries is kind of the opposite.”

Whether that will change in the future is unknown, but for now, some European companies with activities in China are choosing the less radical option of separating their China operations from global ones. So-called “localization strategies” involve building up local supply chains and partnerships to avoid getting caught in the fray of geopolitical risks.

One of the latest examples of that trend was German carmaker Volkswagen AG’s decision to set up a regional China board to give it more autonomy and streamline decision making. The company already employs more than 90,000 people in the country and operates over 40 vehicle and component factories along with partners.

But such moves don’t do much to minimize European companies’ reliance on China. They’re also possibly statistically underestimated, as some data on foreign direct investments don’t fully capture profits that are saved and reinvested locally.

Official data suggest Europe’s enthusiasm for investing in China has remained relatively strong in recent years. Germany, for example, directed over 5% of its FDI assets to China in 2020, according to Bundesbank figures, although interest appears to be plateauing.

“Given the very difficult situation in Europe, I doubt European companies will leave China any time soon,” said Alicia Garcia Herrero, chief economist for Asia Pacific at Natixis. “Geopolitical issues might change the balance against further expansion in China, but that will take time given how much the global situation has worsened.”

In a poll published by the European Union Chamber of Commerce in China in May, only 7% of surveyed businesses said the Russia-Ukraine war prompted them to consider shifting investments out of China, while 10% even said that the invasion made China more attractive as an investment destination. However, almost one in four also said the country’s Covid restrictions were making them rethink some investments.

Garcia Herrero cautions that it’s not only market opportunities keeping European companies in China. A key challenge European firms face is that many are losing control of their offices in China, she says, as the number of foreign staff has plummeted during the pandemic and political influence and pressure to reinvest profits is mounting. One example of such influence she cited was the establishment of a Communist Party committee at HSBC Holdings Plc’s investment banking venture in the country several weeks ago.

“It’s not that they are necessarily happy here -- it’s that even if their governments are turning more anti-China, the companies are now more trapped than ever,” she said.