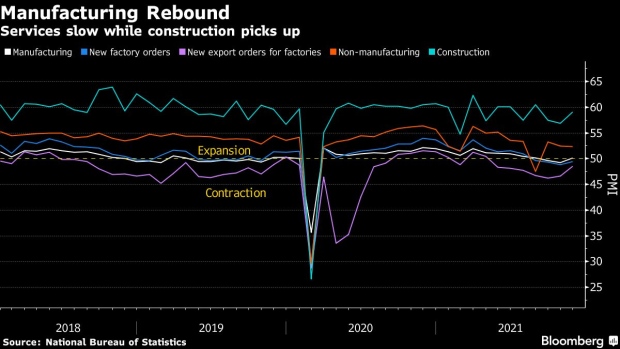 (Bloomberg) -- China’s factory sentiment improved in November as the impact of a power crunch subsided and inflation pressures eased.

The official manufacturing purchasing managers index rose to 50.1, the first time in three months it exceeded the 50 mark that signals an expansion in production. The non-manufacturing gauge, which measures activity in the construction and services sectors, fell slightly to 52.3. Both measures beat economists’ expectations.

November usually sees a seasonal rebound as there are more working days compared to October when China closes for a week-long national holiday. Energy shortages, which ravaged factory production in September and October, also eased during the month as coal producers boosted output and inventories rose.

“The data signal a stabilization of the current slowdown,” said Raymond Yeung, chief economist for Greater China at Australia & New Zealand Banking Group Ltd. The construction sub-index increased to 59.1 from 56.9, which suggests “activity seems to be reactivated, thanks to government relaxation measures supporting property projects,” he said.

The economy continues to be undermined by a housing market crisis and frequent Covid-19 outbreaks, which are weighing on next year’s outlook. Several economists expect growth to slow to under 5% in 2022, with more fiscal and monetary support likely to follow.

Policy makers are trying to moderate the sharp downturn in the property market, while providing targeted support to areas such as small businesses and green technology. More clues on policy action will likely come next month, when the Communist Party holds its Central Economic Work Conference.

A set of early indicators showed China’s economy continued to slow in November with car and homes sales dropping again as the housing market crisis dragged on. Strong export demand ahead of the year-end holiday season partly helped offset the property slump.

Key highlights from the PMI report:

(Updates with comments from economists and more details)