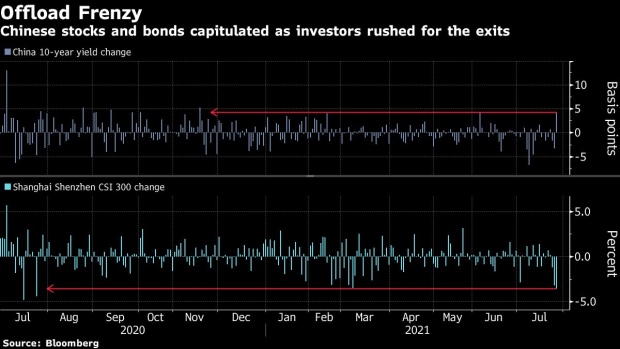 (Bloomberg) -- The Chinese market rout is forcing Wall Street to re-assess the investment case for the world’s second-biggest economy.

Beijing has targeted private education and technology companies in a series of far-reaching reforms that have raised questions about how far Xi Jinping’s Communist Party is willing to go.

“The latest crackdown is more violent than our expectation,” said Haiyan Li-Labbé, a fund manager at Carmignac. “Investors are asking which one will be the next.”

Whether it’s economic growth or the regulatory landscape, fund managers say it’s all become a lot harder to predict, and added a new dimension of risk to global markets. To Ameriprise Financial Inc.’s Anthony Saglimbene, the long-term potential of China doesn’t look like it’s worth the risk anymore, while Kairos Partners’ Alberto Tocchio counted himself lucky for deciding to sell a few days ago.

The nervousness throughout markets was clear on Tuesday as speculation about U.S. traders dumping Chinese assets led to deepening losses. The Hang Seng Tech Index fell as much as 10% and the yuan slid to its weakest since April against the dollar.

Others were looking to buy on the cheap. Luke Hickmore, the investment director at Aberdeen Standard, said he’s debating whether to buy more bonds of Sunac China Holdings Ltd., a Chinese real estate company.

“A lot of the sector has got caught up with Evergrande, perhaps unfairly,” he said. “We tend to see everyone punished for one problems with one group.”

Funds tracking the nation’s companies were among the biggest losing U.S. exchange-traded products. The $649 million iShares China Large Cap UCITS ETF was down 13% in Tuesday trading. The $4.3 billion KraneShares CSI China Internet Fund, which has lured more than $1 billion in the last two weeks, fell 7%.

Tensions between the U.S. and China have also loomed large in the minds of traders, and there’s been widespread speculation about tougher enforcement actions. Next month, a ban on U.S. investment in some Chinese companies with ties to the military or surveillance industry, including Huawei Technologies Co. and the country’s three biggest telecommunications companies, will take effect. Fund managers will have one year to fully divest.

Here’s what other market participants are saying:

John Roe, the head of multi-asset funds at Legal & General, who is long on Chinese bonds.

“What we will avoid is selling into a panic,” he said. “With so much negativity you’d really have to question where you have an edge versus the dominant market narrative. Our next move will hopefully be against the news and flow.”

“The China crackdown has caught some of our funds where we had exposure either in the ADRs or Prosus in Europe. A couple days ago, I suggested halving the positions, but it still hurts,” he said. “The market is, however, now rightly scared about the increasing scrutiny and interference form the regulator and we are possibly in the early days of a new cold war and we might see some further capitulation.”

“Everybody thought it was just a one-time issue with Alibaba because Jack Ma had become too big for his britches,” he said. “However, with the moves in more recent months, we now know that it is a change in policy for China. It has changed the risk/reward equation significantly in terms of investing in China.”

“Combined with deteriorating U.S./China relations, the investment picture for U.S. investors is very unclear at the moment,” said Saglimbene. And China’s recent regulatory crackdown across tech and education providers is having intense consequences for stock prices in these areas, as the level of uncertainty/risk may now outweigh the longer-term growth opportunities.”