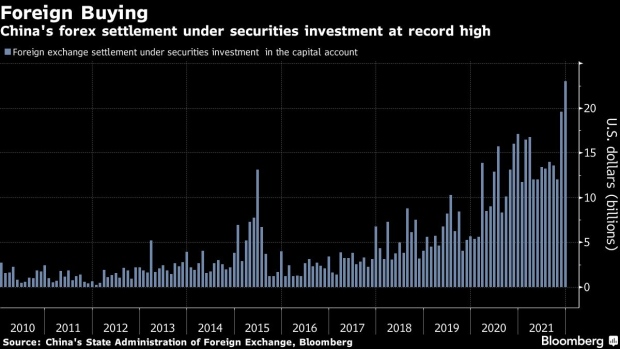 The surplus on the current account -- the broadest measure of trade in goods and services -- climbed to $224.2 billion last year, the highest since 2013. The capital account surplus reached $83.2 billion, the most since records began in 2010, according to Bloomberg calculations of data released by the State Administration of Foreign Exchange.

The figures reflect China’s strong trade surplus during the pandemic and inflows into yuan-denominated bonds, said Stephen Chiu, chief Asia FX and rates strategist at Bloomberg Intelligence. He expects the surpluses to remain robust in 2022, although inflows into onshore bonds may start to slow as the yield spread between China and the U.S. narrows as the Federal Reserve starts hiking interest rates.

The surging surpluses provided support to a rallying yuan, which strengthened 2.7% against the U.S. dollar last year, extending the 6.7% gain recorded in 2020. The offshore yuan is inching toward 6.33 per dollar, a level last seen in December when the People’s Bank of China raised the foreign-currency reserve ratio to cool the gains.

“In 2022, overall forex settlements are likely to be similar to last year, especially in terms of a robust current account surplus,” said Chiu. “Even though global economic growth may slow cyclically, China’s exports are likely to continue to constitute a large share globally because the pandemic continues.”

Overseas investors boosted their holdings of Chinese sovereign bonds by 575.6 billion yuan ($90.9 billion) in 2021, the fastest pace on record compared with previous years, according to Bloomberg calculations of Chinabond data.

Foreign exchange settlement under securities investment in the capital account, which reflects offshore investors’ buying of onshore equities and bonds, surged to $23 billion in December, the highest since records began in 2010.

Ken Cheung, chief Asian FX strategist at Mizuho Bank Ltd., said the high returns of yuan-denominated assets and the stability of the yuan exchange rate are attractive to foreign capital.

However, the narrowing U.S.-China yield spread will lead to slower inflows into the onshore bond market, and direct investment next year could ease, considering multiple factors, including regulations, U.S.-China relations and China’s slowing economy, Cheung said.