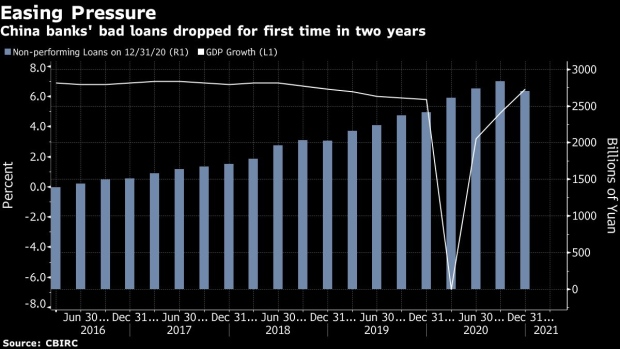 (Bloomberg) -- China’s largest banks are set to extend their share rally after unexpectedly delivering their biggest jump in quarterly profits in at least a decade, boosted by rising demand for credit and easing bad-loan pressure as economic growth accelerates out of the pandemic.

Reporting their earnings on Friday, Industrial & Commercial Bank of China Ltd., the world’s largest lender by assets, China Construction Bank Corp., the second-largest, and smaller rival Bank of Communications Co. all posted gains in net income of at least 44% in the last three months of 2020, far exceeding analyst estimates.

After suffering through worst earnings slump as they were enlisted to help millions of borrowers struggling during the pandemic with cheap loans, China’s $50 trillion banking industry is now being allowed to return to more prudent growth and risk management. With the virus largely contained, policy makers have renewed a campaign to contain risks, easing stimulus and propelling interest rates higher.

“The banking sector has just started to see a recovery in earnings and valuation,” Zhang Shuaishuai and other analysts at China International Capital Corp., wrote in a note. They see a more than 45% upside potential for Hong Kong-listed bank shares over the next one to four quarters, forecasting the Chinese economy will grow about 9% in 2021.

Appetite for Chinese bank stocks, long regarded as perennial laggards, is growing as investors hunt for cheaper parts of the market to escape stimulus-fueled valuations. The CSI 300 Banks Index has climbed nearly 10% this year and is trading near the highest in 14 years. In Hong Kong, shares of the largest banks including ICBC and Construction Bank also outperformed the benchmark Hang Seng Index.

Expectations that Beijing will ease up on requiring that lenders support pandemic-hit firms, coupled with the prospect of rising interest rates, are seen bolstering earnings. The four largest Chinese banks may report a 6% increase in combined profit this year, according to a consensus estimate compiled by Bloomberg.

With market rates rising, lending rates are likely to follow suit, Guo Shuqing, chairman of the China Banking and Insurance Regulatory Commission, said this month. Globally, investors are recasting expectations for the year amid a surge in U.S. bond yields that has sent shares of banks higher.

Still, the sector isn’t out of the woods yet. Loan growth is expected to slow over the next 12 to 18 months as stimulus eases while risks to assets will remain high, according to Zhu.

Impairment losses jumped 13% last year at ICBC and rose 19% at both Construction Bank and Bocom.

Yin Jiuyong, a vice president at Bocom, said at a briefing on Friday that asset quality pressures remain, but the trend is improving and the deterioration will eventually be stabilized. At a separate briefing, ICBC Vice President Wang Jingwu also said that the challenges persist, but that the bank has taken preemptive measures to control risks.

Chinese banks were required to forgo a combined 1.5 trillion yuan ($230 billion) in earnings last year by reducing borrowing costs and allowing delayed repayments. The government is keeping some relief policies in place, and has ordered the big lenders to boost their small business loans by 30% this year, down from a 40% target in 2020.

While Beijing’s extraordinary steps helped mitigate the chaos and provided temporary reprieve to trillions of yuan of debt, it hid the true state of asset quality in the banking sector.

The banking industry reported a 3% decline in combined profit in 2020 and its non-performing loan ratio fell 12 basis points in the last quarter, according to official data. Lenders disposed of a record 3 trillion yuan of non-performing loans last year, nearly a third more than a year ago.

The State Council last week decided to extend the payment moratorium and other financing support on small business loans to the end of 2021, in a move that Moody’s said “will mitigate potential loan delinquencies from sectors highly impacted by the pandemic, and lower banks’ funding costs.”