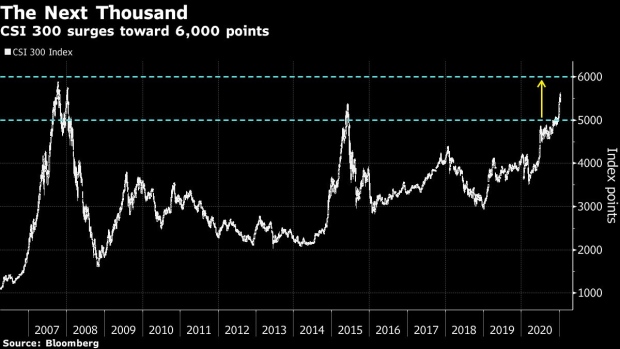 (Bloomberg) -- As China’s stock benchmark trades near the highest level in 13 years and commands the loftiest valuations in five, the country’s investors keep throwing money at the same expensive stocks.

Take Ganfeng Lithium Co., which trades at a staggering 127 times projected earnings. Or the unrelenting rally in distillers like Kweichow Moutai Co., which has pushed an index of consumer staples to near its highest multiple since 2008. Shares of Shanghai Yuyuan Tourist Mart Group Co. -- whose main business is jewelry -- have rallied 60% in January after the firm bought a stake in a spirit maker.

This month’s gains have left the CSI 300 Index needing to rise another 5.4% to better its record close from 2007. Chart watchers are taking heed of bullish technical indicators and bottom-up money managers say China’s economic recovery will translate into better corporate earnings. An abundance of cash in China’s financial system and ultra-low borrowing costs are driving savers to stocks, just as mutual funds invest the record cash they raised last year.

Chasing recent winners in China’s equity market has returned more than 64% over the past 12 months, data compiled by Bloomberg show, by far the most successful strategy. The momentum trade is beating value by more than 100 percentage points, with the gap widening dramatically in January. This month’s spike in turnover suggests new money is compounding the issue by buying the most liquid megacaps.

“The market needs to digest these gains,” said Ma Cheng, chairman at Shenzhen Juze Investment Management Co. “Some sectors like lithium-battery makers and autos are starting to look like bubbles. We are likely to see some adjustments in these sectors.”

Other crowded trades include battery maker Contemporary Amperex Technology Co., which is up 59% since the end of November and pricing at 119 times forward earnings. Or there’s solar energy firm Longi Green Energy Technology Co., which is up 72% from a November trough and trading at 37 times forward earnings, more than double its multiple a year ago. The relative-strength index for the CSI 300 shows the gauge is overbought, which for some traders implies a correction may be due in the near-term.

But round numbers matter in China’s equity market, serving as key support levels and resistance hurdles for indexes. While traders tend to obsess more over precise levels for the older Shanghai Composite Index, the 5,000 point-level marked a major breakthrough for the CSI 300 at the end of last year. The next widely watched level is 6,000 points, which has never been breached.

Momentum-driven stock rallies in China tend to accelerate as the fear of missing out grows, posing challenges for officials as they seek to limit speculation. When the CSI 300 peaked in October 2007, households had rushed to shift funds into the stock market to get better returns than they could get on their bank deposits. Like in 2007, there’s now plenty of liquidity looking to invest within the nation’s capital-controlled borders.

There is optimism among investors that a steady bull market is taking shape as China’s economy puts more distance between itself and the pandemic. The central bank is likely to keep policy rates near all-time lows and ensure ample liquidity, which would spur more flows into stock funds. Key policy meetings expected in coming months could also result in new incentives for industries deemed key to China’s economy, like technology.

“China is leading the world in terms of economic recovery from the pandemic,” said Zhang Yankun, fund manager at Beijing Hone Investment Management Co. “That will continue to be reflected by the stock market.”