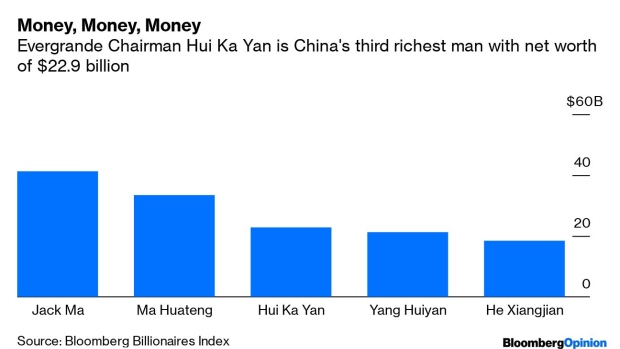 (Bloomberg Opinion) -- There's a lot working against China's most indebted property firm. China Evergrande Group is sitting on US$113.7 billion in debt and its core profit fell 45 per cent in the first half of the year. Real-estate growth is slowing, with banks under orders to curb home loans. President Xi Jinping’s refrain that houses are for living in, not speculation, has been cropping up more frequently.

Time to rein things in, right? Not Evergrande. The company, whose portfolio already includes theme parks and a football club, now wants to become the world’s biggest electric-vehicle maker in the next three to five years. It’s burning through precious cash – 160 billion yuan (US$22 billion) – to build factories in Guangzhou.

Investors are voting on this folly with their feet. The company’s shares have fallen 30% this year, making Evergrande the worst performer among Hong Kong-listed Chinese developers. The property firm’s borrowing costs are among the highest in the offshore dollar market and its bonds are tumbling.

For anyone gawking at Evergrande’s improbably ballooning debt load, just waiting for the doomsday clock to strike midnight, there’s a valuable lesson: This firm is too big to fail. Evergrande is one of China’s biggest developers – with projects in 226 cities – and its billionaire founder, Hui Ka Yan, is the country’s third-richest man. With property accounting for about a quarter of China’s gross domestic product, any instability in the sector has proven too much for Beijing to stomach. Time and again, the government has reluctantly reopened the credit spigots to boost a flagging real-estate market. Just look at 2008, 2011 and 2014.

Crucially, Evergrande has China's largest land reserve, with 276 million square meters (905 million square feet) of gross floor area, according to Citigroup Inc. While the developer has a lot of exposure to China’s smaller cities, where growth is slowing rapidly, it also dominates redevelopment in big, rich cities such as Shenzhen, where profit margins are robust.

Land is scarce in Shenzhen, and urban renewal – demolishing old, low-density buildings to make way for high-rise apartments – is widely seen as the answer to the city’s growing population. These projects also give Evergrande access to cheap lots, which helps keep its land costs among the lowest of its peers, according to Toni Ho, an analyst at RHB Securities. If the protests in Hong Kong accelerate China’s plans to make Shenzhen the the next “global cosmopolis,” according to state-run Xinhua News Agency, Evergrande could be in a plum position.

The company’s diversification into electric cars is sure to bleed money for years, and competition is getting stiffer. During his visit to China last week, Elon Musk managed to score a tax break for Tesla Inc. But carrying out one of Xi’s signature projects has its perks: For example, clean-car manufacturers can get land much more cheaply from local governments than real-estate developers. That helps explain why a host of firms including Country Garden Holdings Co. and Agile Group Holdings Ltd. are jumping in.

Being in Beijing’s favor and securing low-cost inputs is no bad thing for a cash-strapped developer like Evergrande. Maybe there’s a method to the madness of its wild spending.