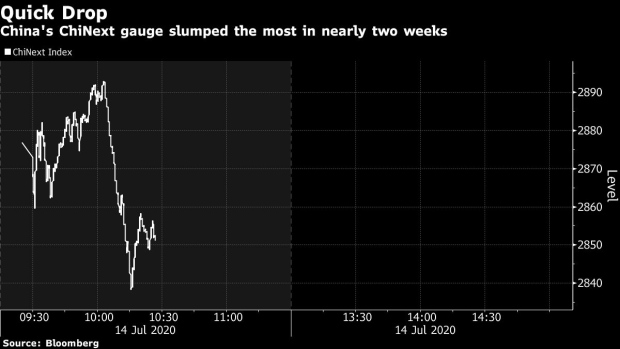 Pedestrians wearing protective masks walk along an elevated walkway as an electronic ticker displays stock figures in Pudong's Lujiazui Financial District in Shanghai, China, on Friday, March 6, 2020. While infections in the rest of the world accelerate, the coronavirus epidemic is showing signs of easing at its center -- China -- with new cases slowing dramatically and recoveries gathering pace. Still, doubt remains over whether the government's statistics show the full picture. Photographer: Qilai Shen/Bloomberg , Bloomberg

(Bloomberg) -- Volatility is picking up in China’s most overheated stocks, a sign that this month’s $1.5 trillion rally is looking vulnerable.

The ChiNext Index fell as much as 2.9% Tuesday, leading losses among China’s major equity benchmarks. The gauge, where a 10% daily cap on individual stock moves will soon double, was up more 60% this year and near the most overbought on record. A measure of historical 10-day volatility is up by about threefold in the past month.

This month’s stock rally in China has pushed the value of the country’s market to almost $10 trillion, a level that marked the top of the equity bubble five years ago. Similarities between now and then have started to displease policy makers, who have since last week take steps to rein in stocks. Plans from two state-backed funds to sell shares were announced late Monday, following similar moves last week.

The massive amount of Chinese shares that will soon be available for sale for the first time could also encourage some profit-taking. Expiring this quarter are a record 1.35 trillion yuan ($193 billion) worth of lockups that prevent early investors and controlling shareholders from disposing of their allocated shares, Jefferies Group analysts wrote in a note dated Monday.

July alone will mark the biggest month for unlocks since 2015 at 597 billion yuan, Jefferies added.