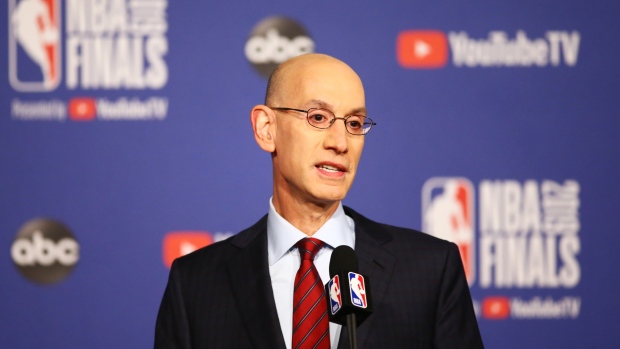 TORONTO, ONTARIO - MAY 30: NBA Commissioner Adam Silver speaks before Game One of the 2019 NBA Finals between the Toronto Raptors and the Golden State Warriors at Scotiabank Arena on May 30, 2019 in Toronto, Canada. NOTE TO USER: User expressly acknowledges and agrees that, by downloading and or using this photograph, User is consenting to the terms and conditions of the Getty Images License Agreement. (Photo by Vaughn Ridley/Getty Images) , Photographer: Vaughn Ridley/Getty Images North America

(Bloomberg) -- China’s outrage against the National Basketball Association escalated as citizens returned from a week-long holiday, transforming what was supposed to be a high-profile promotional week for the league in one of its biggest markets into a public-relations disaster.

Celebrities and fans joined the backlash by announcing they would skip the exhibition games this week in China where top stars like LeBron James were scheduled to play, while an NBA charity event at a Shanghai primary school was canceled on Tuesday.

The NBA is under pressure after Daryl Morey, general manager of the Houston Rockets, tweeted an image of a slogan supporting Hong Kong’s pro-democracy protesters. While the message was quickly deleted, it sparked fury from supporters of the communist government, casting a shadow on one of China’s favorite teams.

The anger broadened beyond the Rockets to the entire league after Commissioner Adam Silver tried to defend Morey.

Acknowledging the economic impact from the tweet, he told Kyodo News in Japan that as a “values-based organization, I want to make it clear that Daryl Morey is supported in terms of his ability to exercise his freedom of expression.”

The comment added fuel to the flames after Chinese sponsors including sportswear maker Li Ning Co. suspended ties with the Rockets and broadcasters stopped airing their games. Sports forum Hupu said it has blocked all Rockets-related news, streaming and comments.

The backlash threatens what is supposed to be the NBA’s annual big show of commitment to China, its most important market outside the U.S., in the form of two pre-season games featuring different top teams every year. This year, the Los Angeles Lakers and the Brooklyn Nets are on the featured bill.

Through decades of painstaking deal-making, the NBA created a multibillion-dollar opportunity in the country, where 800 million people now watch its programming on various platforms every year. The league has seen double-digit growth in China annually since 2008.

Wu Jinyan, who became popular for her leading role in the costume drama “Story of Yanxi Palace,” was one of the celebrities advocating a boycott of the NBA’s events this week.

“It is every Chinese citizen’s undeniable responsibility and duty to resolutely defend national sovereignty and territorial integrity,” Wu wrote on social-media platform Weibo. The actress wrote that she “opposes any comments or activities attempting to separate the country.”

The NBA is the latest international business feeling the heat from the standoff between pro-democracy demonstrators and Hong Kong’s Beijing-backed authorities that has escalated since June. For many Chinese, any support of the protesters is seen as a challenge to the nation’s sovereignty over its territory.

“The love and feelings of Chinese sons and daughters have been rooted in this wide land for thousands of years,” said Fan Chengcheng, the 19-year-old rapper who is also the younger brother of one of China’s most well-known actresses, Fan Bingbing.

Stressing on his official Weibo account that he firmly advocates the “one China” principle, he wrote, “We will not allow anyone to trample on this or tear this apart.”

In Hong Kong, meanwhile, some protest supporters see the NBA controversy as an opportunity to promote the cause. In discussions on LIHKG, a popular forum among protesters, some are proposing to wear Rockets gear together with gas masks at demonstrations.

To contact the editors responsible for this story: Rachel Chang at wchang98@bloomberg.net, Jeff Sutherland