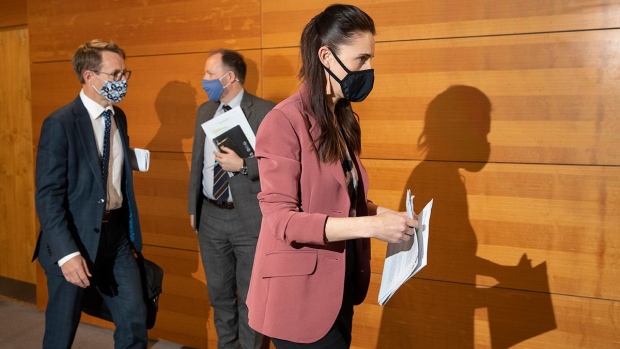 Australia’s Queensland outlined plans to reopen its borders to the rest of the nation, following pressure from Prime Minister Scott Morrison on states to do so by Christmas.

Myanmar is preparing to welcome foreign tourists again early next year, while Indonesia is lifting border restrictions as its outbreak has eased. New Zealand extended a lockdown in Auckland for at least another two weeks, but a vaccination target will be introduced to signal when curbs could be eased.

Anthony Fauci, President Joe Biden’s chief medical adviser, said he expects U.S. regulators to consider whether people who got the one-dose Johnson & Johnson vaccine should get an mRNA shot as a booster.

The Czech Republic shortened the limit for receiving the third dose of Pfizer/Biotech vaccine to six months from eight months.

The move follows an acceleration in the spread of the coronavirus during the last week in the nation of 10.7 million, with 787 new cases reported on Sunday, the highest number on any Sunday since April.

China is seeing a new cluster of cases in its northwestern provinces, with eight infections detected since Sunday.

The resurgence has been traced to two retired university lecturers from Shanghai who were infected in Shaanxi Province. Since then, over 1,500 close contacts have been identified and six more people found to have the virus in Shaanxi and Gansu provinces.

Xi’an, the Shaanxi capital that’s home to some 13 million people and the location of the Terracotta Army, is preparing to roll out a citywide testing program, according to the Global Times.

Taiwan reported zero local and imported cases of Covid-19 Monday, for the first time since April 8, said Chou Jih-haw, Director-General of Centers for Disease Control, at a briefing in Taipei.

Taiwan is moving closer to cutting its virus alert to level 1, the lowest, given that the local situation has stabilized, Health Minister Chen Shih-chung was quoted by Taipei-based Apple Daily as saying.

Valneva SE is preparing to seek regulatory approval for its experimental Covid-19 vaccine after showing it elicits better immunity than AstraZeneca Plc’s shot.

Patients injected with two doses of the product had more antibodies -- a proxy for protection against the coronavirus -- and fewer side effects than those who got the Astra shot in a study of about 4,000 adults, the French drugmaker said in a statement Monday. Both groups had the same number of Covid cases and no patient got severely ill, the company said.

New Zealand Prime Minister Jacinda Ardern extended a lockdown in Auckland for at least another two weeks, but said a vaccination target would be introduced on Friday to give people an indication of when restrictions could be eased.

Auckland will remain at Alert Level 3, meaning people can’t leave the city and should stay at home where possible, Ardern told a press conference Monday in Wellington.

Myanmar is finalizing procedures for reopening its tourism sector to foreigners early next year and will initially target visitors from Southeast Asia, according to Union Minister for Hotels and Tourism Htay Aung.

The effort comes as new Covid-19 infections decelerate in the nation of 55 million, which has prompted the lifting of a ban on inter-provincial travel. The easing and traditional holidays have already spurred some locals to go on vacation.

Fortress Australia’s walls have cracked further after Queensland state outlined plans to reopen its borders to the rest of the nation.

Queensland won’t require fully vaccinated travelers from other states to quarantine on arrival from Dec. 17 or once 80% of the population are inoculated, whichever is earlier, Premier Annastacia Palaszczuk told reporters Monday. Overseas arrivals will be allowed to quarantine at their place of residence, she said. All border restrictions will be lifted for vaccinated travelers -- both domestic and international -- should the 90% threshold be met.

Singapore had the fewest new daily Covid-19 cases since Oct. 14, at 3,058 as of noon on Oct. 17, according to the Ministry of Health. The country has seen a surge in the number of virus patients in critical condition, with 66 people in the intensive care unit compared with 48 people on Friday.

The U.K. reported 57 new deaths on Sunday, along with 45,140 more cases, the most in about three months, prompting the concerns raised by Gottlieb.

“We need urgent research to figure out if this delta plus is more transmissible, has partial immune evasion,” he said in a tweet. “There’s no clear indication that it’s considerably more transmissible, but we should work to more quickly characterize these and other new variants. We have the tools.”

President Biden’s chief medical adviser said he expects U.S. regulators to consider whether people who got the one-dose Johnson & Johnson vaccine should get an mRNA shot against Covid-19 as a booster.

“If you boost people who have originally received J&J with either Moderna or Pfizer, the level of antibodies that you induce in them is much higher than if you boost them with the original J&J,” Anthony Fauci said on ABC’s “This Week” on Sunday.

“But the data of boosting the J&J first dose with a J&J second dose is based on clinical data,” he said. “So what’s going to happen is that the FDA is going to look at all those data, look at the comparison, and make a determination of what they will authorize.”

The country added 19 fatalities in the 24 hours through midday Sunday, the fewest since May 25, 2020. There were 747 confirmed infections over the same time period, near the 16-month low of 620 reached on Oct. 11. Indonesia’s outbreak has eased in recent weeks, allowing the government to lift movement and border restrictions further, including reopening tourist hot spot Bali to 19 countries.