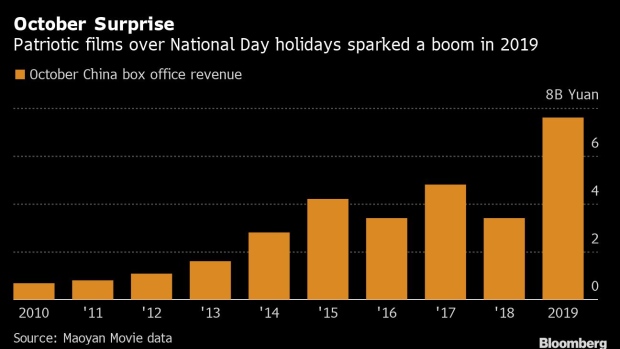 China’s filmmakers are making movies about the coronavirus pandemic, seeking to cast a positive light on the government’s battle to contain the outbreak after criticism of their slow response at the start of the crisis.

Bona Film Group, backed by e-commerce giant Alibaba Group Holding Ltd., is making “Chinese Doctors,” about medical professionals drawn to the fight at the outbreak’s epicenter. At the same time, “Common World -- Everybody Fights the Pandemic,” is being produced by a group of nine studios including Beijing Qi Tai Culture & Media Co. and South Film Incubation Base.

The studios are plotting out positive portrayals of physicians while the government is also contending with criticism that in the outbreak’s earliest days, it silenced whistle-blowing doctor Li Wenliang, who later died of the disease. As the country nears the Communist Party’s centennial next year, Beijing has also been pushing for patriotism as it cracks down on dissent in Hong Kong and tussles with the U.S. on trade.

“Movies can further embolden such a patriotic, nationalistic narrative,” said Chris Fenton, U.S.-Asia Institute trustee. “The Chinese Communist Party will definitely use them as 2020 progresses to combat COVID-related discontent, amplify patriotism, and build enthusiasm for the 100th anniversary.”

While the script for “Chinese Doctors,” isn’t finished, signs of the Chinese government’s push for a more positive narrative on the pandemic are growing. Twitter earlier this month said it had identified and removed tens of thousands of fake accounts linked to the Chinese government. Some of the false names were being used to praise Beijing’s pandemic response.

Meanwhile, New Wave Pictures in Beijing is at work on “Speak to You While Smiling,” a film about medical workers and common people banding together to fight the virus in the northern port city of Dalian.

Bona is also working on a film set during the Opium War and telling the story of Lin Zexu, who became a national hero after dumping tons of the drug into the sea. A third planned film centers on the plot to assassinate former Premier Zhou Enlai in 1955.

Bona didn’t immediately respond to a request for comment.

Patriotic films including “My People, My Country,” and Bona’s “The Captain,” emerged as hits last year, when they were released to coincide with the 70th anniversary of the country’s founding.

This year, cinemas face the additional reopening challenge of scheduling potential blockbusters sidelined by pandemic closures that began in late January, just before the year’s biggest movie-going holiday. In addition to forcing cinemas shut, the crisis has wiped out more than 13,000 film and TV companies in the country, the Securities Times newspaper reported, citing canceled or revoked business registrations.

July and August are traditionally big box office months, though it remains unclear whether restrictions on cinemas will discourage studios from promoting any big films during the period.

As of June 16, China’s cinema operators were waiting for regulators to release rules and a date for resuming business. A resurgence in infections in Beijing, for example, has led to delay reopening cinemas in the city.

October, which includes the eight-day National Day holiday period this year, has traditionally been set aside for patriotic-themed movies.

Fenton said priority scheduling is one additional reason studios in China are turning increasingly to films likely to win the government’s support.

“Not only will the CCP artificially open the lanes to guarantee success, but China’s own film industry will do so in an effort for survival,” said Fenton.