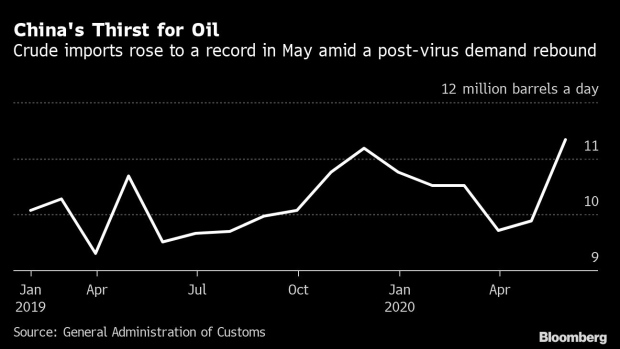 The Estrella, a crude oil tanker operated by Lundqvist Rederierna AB, left, and Nansen Spirit, a crude oil tanker operated by Teekay Corp., transfer oil between them off the coast of Southwold, U.K., on Friday, May 15, 2020. Nine tankers carrying about 5.58 million barrels of North Sea crude that loaded in April are floating off U.K. ports, according to ship-tracking data compiled by Bloomberg. Photographer: Chris Ratcliffe/Bloomberg , Bloomberg

(Bloomberg) -- China’s crude imports soared to an all-time high last month, capping an astounding rebound in oil demand after the nation’s economy was flattened by lockdowns to contain the coronavirus pandemic.

Imports surged to 47.97 million tons in May, or 11.34 million barrels a day, according to customs data on Sunday. That’s a 15% jump from April and 160,000 barrels a day more than the previous record set in November.

The figure underlines how complete the demand recovery has been in the world’s largest oil importer, even as other countries are still struggling with the impact of bruising lockdowns on their economies. It also suggests that China has been taking advantage of the collapse in prices this year to fill its strategic reserves on the cheap.

“Much of it is likely opportunistic buying to capitalize on low crude costs,” said Michal Meidan, head of China research at the Oxford Institute for Energy Studies. “Demand for products is recovering, but there is still plenty of crude and product in tanks.”

The surge was predicted by ship-tracking data, which showed tanker arrivals rising to pre-virus levels, as cargoes bought during oil’s crash into the $20s began to land. At least two dozen tankers on China’s east coast were awaiting to discharge earlier this month.

Fuel demand has largely rebounded to pre-virus levels, with gasoline and diesel leading the recovery as commuters prefer the safety of their own cars over public transport. Rush-hour traffic in many Chinese cities has surged in the last couple of weeks, in many cases running either at or even above year-ago levels, according to data from navigation company TomTom International BV. Jet fuel remains the laggard, as international travel remains at just a fraction of earlier levels.

The rise in consumption has prompted processors to crank up run rates, with independent refiners in Shandong province operating near record levels since the beginning of May. Much of the surge in crude purchases is from these kind of plants as they try to use up import licenses, Meidan said.

The collapse in Chinese consumption in early February marked the beginning of one of the darkest chapters in the history of the oil industry, and foreshadowed the damage to the global economy wrought by the virus.

As such, China’s recovery remains on an unsteady footing as its export-reliant factories wait for other economies to return to health. And with refinery maintenance season in China about to begin, there’s a risk that buyers have been front-loading purchases and that imports will slow in the second half of the year, Meidan said.

Still, energy demand is recovering as more businesses and schools reopen and the government begins to pump billions of dollars in stimulus into the economy. A private gauge of activity in the nation’s services sector rebounded sharply in May to its highest in a decade, underscoring the momentum behind the economic recovery.