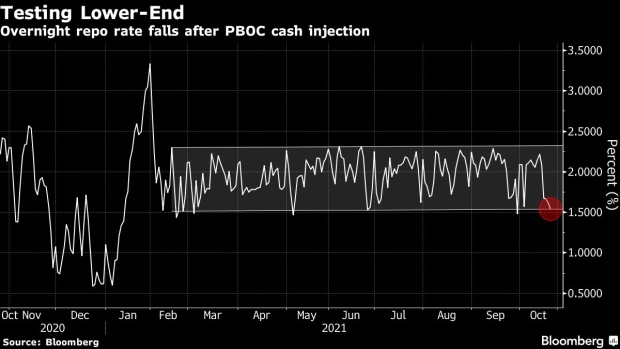 The overnight interbank repo rate dropped as much as eight basis points to 1.53%, the lowest since September 29 and near a nine-month low. The People’s Bank of China injected a net 190 billion yuan ($30 billion) into the financial system via seven-day reverse repurchase agreements for a second straight day Tuesday, which was the biggest single-day addition since January.

“These operations help soothe the market,” said Frances Cheung, rates strategist at Oversea-Chinese Banking Corp in Singapore. “Still, this is short-term money while the liquidity tightness is due to longer-term/permanent payment needs.”

The downside for local rates is limited unless there is a provision of longer-term liquidity, Cheung added

Moreover, regional authorities plan to sell 544 billion yuan of bonds this week, the second-largest weekly issuance in history, according to data compiled by Bloomberg.

The cash injections have dampened hopes of a reduction in banks’ reserve requirement ratios, keeping borrowing costs elevated. That’s because policymakers are seeking to strike a balance between boosting an economy hit by new Covid-19 outbreaks and China Evergrande Group’s debt crisis, and keeping inflation anchored.

“Overall we don’t see excessive liquidity injections beyond the seasonal demand and expect the PBOC to return to a liquidity drain at the beginning of November,” said Liu Peiqian, China economist at Natwest Markets Plc in Singapore.