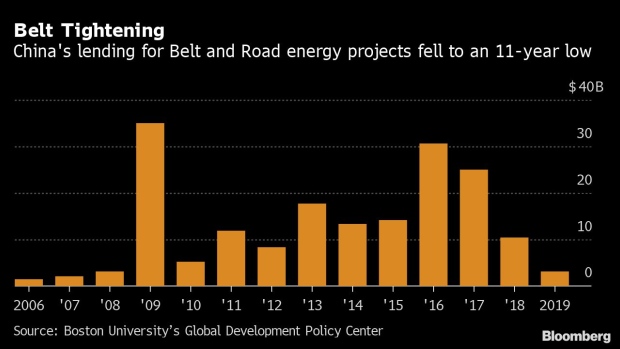 China’s spending on overseas energy projects has dropped to its lowest in more than a decade, as the nation focuses on domestic issues and rethinks its strategy around indebtedness and the world’s energy mix.

The nation’s foreign energy financing dropped by 69% to $3.2 billion in 2019, according to data from Boston University’s Global Development Policy Center. Only three nations received financing for new projects from China’s policy banks last year, compared with five the previous year.

The drop underscores how a slowing domestic economy and concerns related to debt levels in recipient nations are eroding China’s desire to wield influence through spending billions of dollars to finance mega-projects abroad, mostly through the Belt and Road Initiative announced by President Xi Jinping in 2013. The coronavirus epidemic will only add to domestic headwinds that include credit stress among companies and the ill-effects of the prolonged trade war with the U.S.

“The Chinese are getting concerned about the debt levels countries have, and want to be more cautious about their lending,” said Kevin Gallagher, a professor at Boston University and an author of the report. “I wouldn’t expect a bounce-back in 2020, given the circumstances related to the virus and the general downturn anyway.”

China has financed $251 billion in energy projects since 2000 with about three-quarters of that in Belt and Road nations, according to the University’s research, which tracks data from the country’s two policy banks, the China Development Bank and the Export-Import Bank of China. At the same time, China’s lending has drawn scrutiny over whether it’s unduly wielding its political clout to force indebtedness on other nations. The oil sector has received the biggest amount of loans, followed by coal and hydro power.

While Beijing’s financing of coal will hardly endear it to climate activists, it has filled a gap vacated by other lenders, concerned that a hardening line against the dirtiest fossil fuel could make coal mines and power plants go out of business before they’re able to repay their debts. China’s efforts have allowed energy-thirsty Pakistan to mine coal for the very first time, as well as financing projects from South Africa to Southeast Asia.

Still, Xi has publicly urged more clean energy as part of the program, as China has become one of the world’s leading manufacturers of solar and wind power components. Of the three Belt and Road projects that received financing last year, two were hydro developments in Nigeria and Guinea, and the other a coal project in Turkey, according to Boston University.

“We would hope to expect a real shift toward wind and solar and so forth in 2020, but I have to say as an economist there needs to be a supply shift and a demand shift,” Gallagher said. “So if the Chinese are willing to put more solar and wind on offer, of which they have plenty, countries on the demand side need to be asking for that. We haven’t seen too many.”

To contact the reporters on this story: Faseeh Mangi in Karachi at fmangi@bloomberg.net;Dan Murtaugh in Singapore at dmurtaugh@bloomberg.net

To contact the editors responsible for this story: Ramsey Al-Rikabi at ralrikabi@bloomberg.net, Jason Rogers, Jasmine Ng