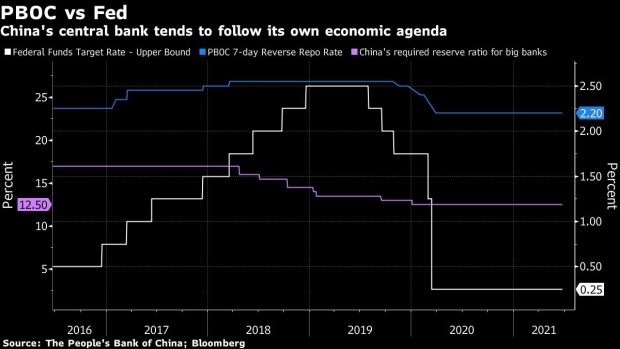 Passengers wait at a bus stop across the People's Bank of China (PBOC) building in Beijing, China, on Thursday, March 4, 2021. The low cost of borrowing in China’s money markets suggests the central bank again has room to tighten policy by withdrawing liquidity from the financial system -- like it did in January. Photographer: Qilai Shen/Bloomberg , Bloomberg

(Bloomberg) -- China’s central bank is a step ahead of its U.S. counterpart in reining in its Covid-19 emergency stimulus, relieving potential market pressure from the Federal Reserve’s looming shift in policy.

It’s a different backdrop to the U.S., where record fiscal stimulus is driving up growth projections and prices are rising faster than expected. The Fed is now debating when it can begin scaling back its bond-buying program and possibly start raising interest rates.

Unlike in the U.S.’s previous tightening cycle, when interest rates in China also moved higher in part to ease capital outflow fears, this time around capital has been gushing into China. And even though the yuan may weaken as the Fed tapers -- which brings some welcomed relief to exporters and the PBOC -- the impact will likely be muted.

“China is taking its own policy path due to a very different growth and inflation story there versus the U.S.,” said Dariusz Kowalczyk, head of research for Asia, excluding Japan, at Credit Agricole CIB in Hong Kong. “The Fed’s policy shift is putting upward pressure on global foreign-exchange market volatility, and the PBOC would welcome the dollar-yuan exchange rate being impacted by it as well.”

Beijing had repeatedly signaled that the yuan’s advances against the dollar have been too fast as it rose to the highest level since 2018 in May. While the onshore yuan has fallen 1.2% since the Fed’s surprise hawkish turn, it’s still up 0.9% this year as Asia’s second-best performing currency.

China’s higher-yielding markets remain attractive to global investors, which may help keep the yuan stronger against its peers. Though U.S. rates have jumped in the wake of the Fed’s signal, Chinese 10-year sovereign bonds still yield around 1.6 percentage points more than Treasuries of the same tenor. The inclusion of some government debt into FTSE Russell’s flagship global debt index will also help support inflows.

The PBOC began signaling a shift away from stimulus in the latter part of last year, when the rest of the world was still struggling to recover from deep recessions. Officials have repeatedly raised concerns about rising debt and asset bubbles, pledging to stabilize debt ratios while avoiding any “sharp turn” in policy.

“Even in the early phase of the Fed’s actual tapering, the PBOC will probably still stick to its own policy pace as it’s started normalization already,” said Ding Shuang, chief economist for Greater China and North Asia at Standard Chartered Plc in Hong Kong. The yuan’s softening is “ideal” for Beijing, he said.

While few economists expected the PBOC to raise interest rates this year, some that saw a small tightening window, like Societe Generale SA’s Wei Yao and Michelle Lam, say that is now closing. A growing camp of analysts have started downgrading their growth forecasts after a raft of weaker-than-expected economic data recently, especially on the consumption side.

“The tide of yuan appreciation may have turned following the Federal Reserve’s recent hawkish announcement,” said Bloomberg Economics’ Chang Shu. “Even so, a rise in corporate demand in May -- a first this year -- suggests there’s still support for the yuan -- limiting scope for rapid depreciation.”

When it comes to short-term market rates, the PBOC is also signaling a willingness to provide enough liquidity to avoid borrowing costs from climbing. On Thursday, the PBOC increased its injection of short-term cash for the first time since March, a marked shift in its approach in managing liquidity after months of providing the minimum to meet market demand.

Liquidity concerns will become more of a factor in the second half of the year as local governments likely step up bond sales, having sold only about 30% of their full-year quota so far.

“We don’t think a more hawkish Fed would affect China’s policy,” Robin Xing and other economists at Morgan Stanley wrote in a note. “Instead, there could be a fine-tuning in the policy stance on tightening at the July Politburo meeting given the recent growth hiccup.”