China lifting the ban on Canadian pork is an 'invitation' to dance: Trade lawyer

China’s pig herd will take more than half a decade to recover from a deadly virus, and even then the nation’s meat consumption won’t be the same as before, according to Rabobank International.

The world’s biggest pork market won’t stabilize from the damage inflicted by African swine fever until 2025 and meat imports can’t make up the shortfall, the bank said. China’s hog herd has more than halved to less than 200 million since the first case was reported in August last year, the bank said.

“It isn’t fully appreciated that the market will take years – probably half a decade to rebalance,” Chenjun Pan, an analyst at Rabobank, said in a statement on Friday. “Even when the market does rebalance, it’s going to be a different meat environment in China.”

China is desperately trying to increase production and import more pork and other meats like beef and chicken to satisfy domestic demand. Local retail prices have surged, indicating that shortages are starting to bite. Rabobank expects the virus to kill a quarter of the word’s pig population, and the bank sees the recovery taking longer than Chinese officials have signaled. 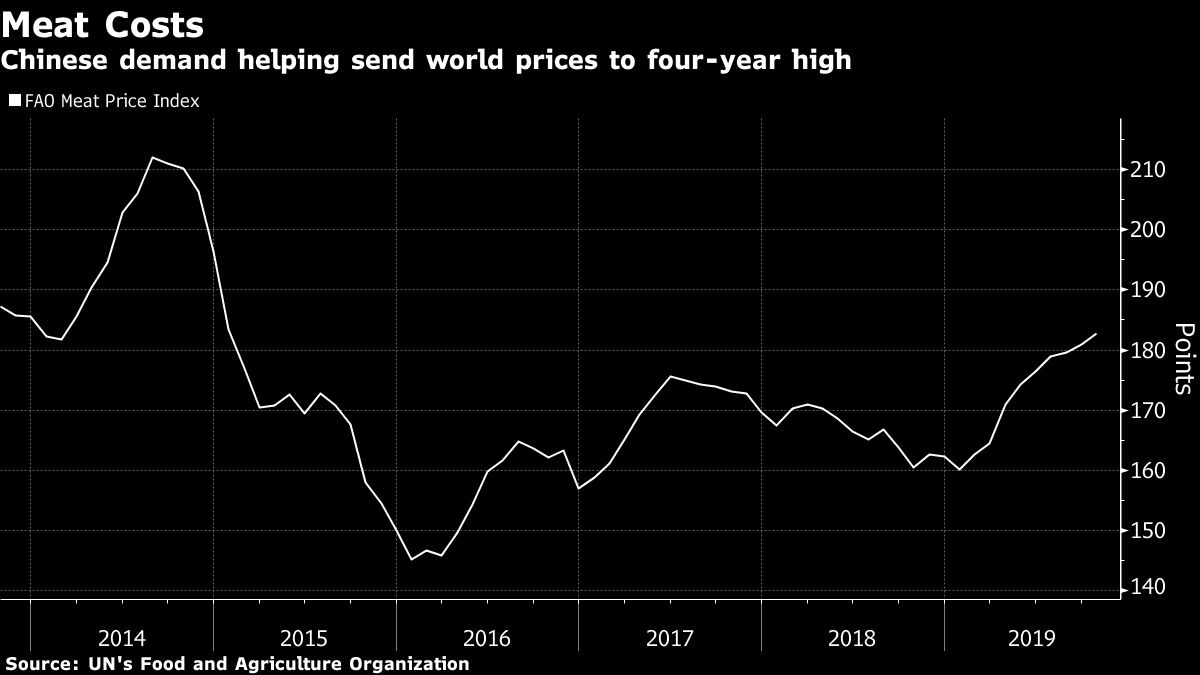 During a recent visit to major livestock provinces of Shandong, Hebei and Henan, Chinese Vice Premier Hu Chunhua urged local governments to resume pig production as soon possible, with a target of returning to normal levels next year.

The crisis will have long-lasting effects on China’s meat industry, according to Rabobank. When the market recovers, pork will remain the country’s protein of choice, but its share of meat consumption will fall to 53 per cent from a recent 63 per cent, it said. Poultry’s share of demand is forecast to increase to 30 per cent by 2025.

“For China, and the global market, this will be the new normal,” Pan said. The Chinese will consume more chilled, frozen and processed meat rather than the preferred fresh warm pork, she said.

Small-scale restocking and large-scale importing will take place next year and in 2021, before hog output increases through 2025, Rabobank said. The market should then rebalance and prices stabilize, but even then the total herd is unlikely to return to the 2018 peak, it said.

--With assistance from Anna Kitanaka.