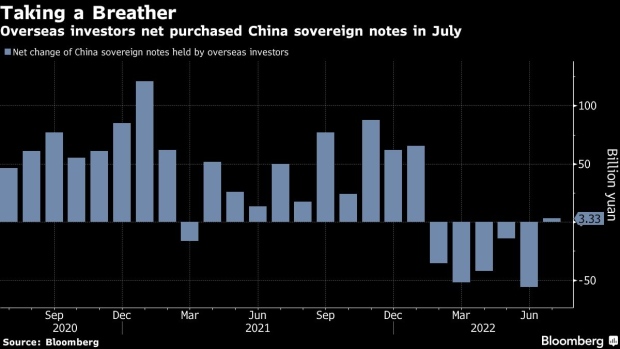 On the bright side, it creates opportunities for capital gains for investors who foresee more easing and suggests China is a reliable destination for diversification. On the other hand, persistently loose policy could deepen the country’s interest-rate discount to the US, complicating the picture of capital flows.

Overseas funds bought 3.3 billion yuan ($486 million) of onshore sovereign notes last month, chalking up the first inflows since January, according to official data. While that was only a fraction of the 199-billion-yuan selloff seen in the five months through June, it was a sign that foreigners had finally gotten over geopolitical tensions fueled by Russia’s invasion of Ukraine and widening monetary policy gap with the Federal Reserve.

China’s rate cut has already pushed the benchmark yield 10 basis points lower this week, marking the largest two-day slump in more than a year. Expectations are growing that China may embrace more monetary easing to arrest the economic downturn. Forecasts for a reduction in loan prime rates next week are gaining traction along with a lower reserve requirement ratio for banks and policy rates in the remaining year.

“China rates will continue to head lower in this quarter on weak growth recovery and further PBOC easing,” Xiaojia Zhi, an economist at Credit Agricole CIB and strategists at the bank, wrote in a note. “The longer-than-expected easing cycle in China would continue to bode well for the accommodative interbank liquidity conditions, and curb any upside room for China rates despite potential rising supply pressure and higher inflation.”

Wider monetary policy divergence between the PBOC and other major central banks would continue to undermine the appeal of the yuan and Chinese debt in the short term as “capital chases higher yields,” said David Chao, a global market strategist at Invesco Hong Kong Ltd.

Inflows to China’s sovereign bonds last month came as Treasury yields eased amid doubts over the pace of further Fed rate hikes, which almost wiped out its yield spread over Chinese government bonds. However, that gap has widened once again as Fed officials reiterated their tough stance on inflation and China cut a policy rate.

Chinese sovereign notes posted a monthly gain of 0.78% in July, the most since January, a Bloomberg Index shows. It’s on track for another 0.65% returns this month.